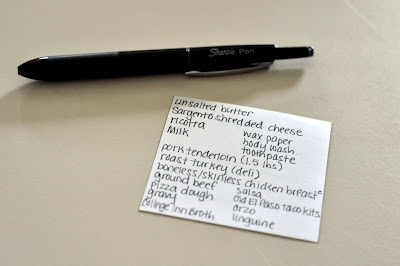 A few weeks ago, I started a conversation on Facebook about menu planning. I wanted to know how many people actually did it, when they'd plan meals for the following week (i.e. Wednesday afternoon v. Saturday morning), and whether anyone had any tips to share about making the process go a little easier.


After that initial conversation, I didn't bring it up again, and I bet some of you figured I had given up before I even started.

Last week, I sat down with the grocery store circular and made note of the items that were on sale, paying particular attention to the proteins and the produce. Then I scrolled through items I had pinned on Pinterest and flipped through some cookbooks to get some inspiration. In no time at all, I had decided on nearly a week's worth of meals. (Stephen cooks dinner once a week, so I didn't plan his meal.)

I was pretty proud of myself and was feeling pretty good about the meals I had chosen... right up until I started to make the dinner I planned for tonight. After pulling out all of the ingredients that I needed for the Beer-Marinated Pork Tenderloin with Red Cabbage, I realized that I hadn't allowed time for the tenderloin to actually marinate.

Once I figured out what I had done, I sat in the living room pouting about how all my hard work was for naught. Having a plan was pointless if I couldn't actually execute it.

Then my saint of a husband reminded me that I hadn't just planned one meal... I had planned several. And it was easy enough to switch tonight's meal with something I planned on making later in the week.

Boy did I feel silly. Of course that was the logical thing to do rather than sit there upset that I couldn't follow the original plan. So I moved the pork tenderloin to another night and bumped up the meal I had planned for Saturday.

Let's hope I'm a little more careful with my time management come Saturday... I'd hate to have to admit that I screwed up the tenderloin twice. ;-)