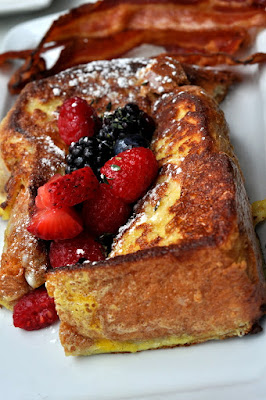 When Stephen and I were up in Boston for my birthday back in May, I had made brunch reservations so I could toast turning 33 with a Bellini and a view of the Common. Unfortunately, when we arrived at the chosen restaurant, we didn't like the vibe (too stuffy) or the menu, which was different than the one posted on their website, so we cancelled our reservation and went in search of other options. 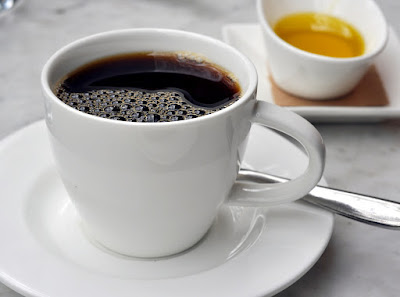 We eventually found ourselves at Bistro du Midi, where we snagged their only open table on the sidewalk with a perfect view for people-watching (my favorite!). The coffee was strong and just what we needed as we considered the options on the brunch menu. 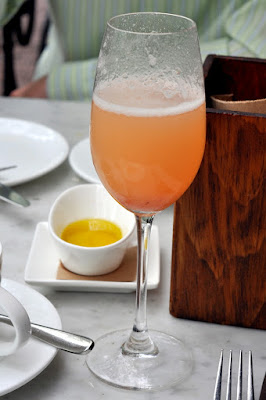 Obviously, I had to order a Bellini. While I welcomed a change in restaurant, this part of the brunch plan was non-negotiable. The Bellini was light and refreshing and everything I wanted out of my birthday [morning] cocktail. I just wish our waiter had actually filled the glass once the bubbles went down. Especially since it was a $12 drink. 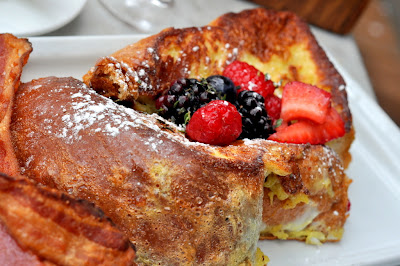 In a non-Michelle move, I skipped my traditional eggs-and-potato brunch and went straight for the Brioche French Toast ($12) with a side of Bacon ($5). Despite being thick-cut, the brioche was light in the center, almost like a pillow. I loved the hint of lavender behind the sweetness of the fresh berries, which made using the accompanying maple syrup totally unnecessary. The bacon was a let-down, however. It had been allowed to come to room temperature back in the kitchen, and the crispiness that I love about bacon was completely non-existent. 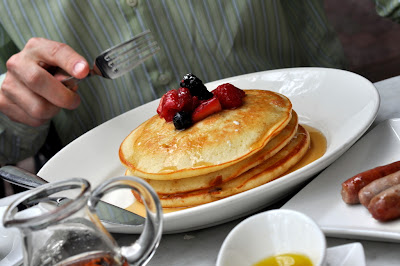 Stephen ordered the Pancakes with Mixed Berry Compote ($12) and a side of Pork Sausage ($5). Based on his silence at the table during the meal and the length of time it took him to clean his plate, it's safe to say he enjoyed the pancakes. I managed to sneak a bite before he devoured everything, and I couldn't get over how light the pancakes were. I wish I knew their secret!

But, like the bacon, the sausage wasn't great. Stephen only had a bite or two before abandoning any hope of cleaning that plate, too.

Overall, I'd say our brunch experience was just okay. While there were definite highlights to the meal, the quality of the food wasn't consistent and it was next to impossible to flag someone down from our table on the sidewalk in order to ask for coffee refills.

Wait for a table to open up inside the restaurant (the waitstaff was much more attentive in there), go for the pancakes, and pass on the breakfast meat.