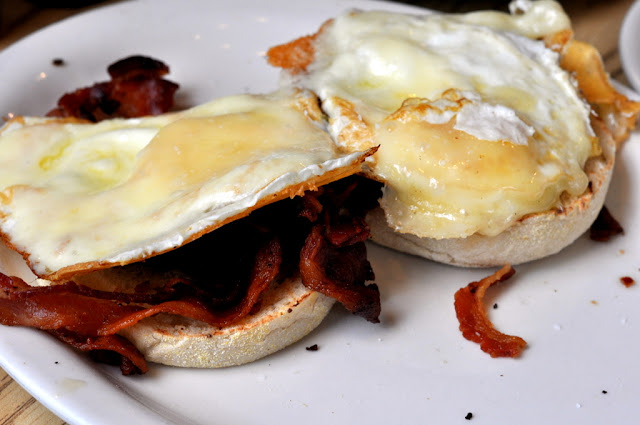 When Stephen and I have a weekend trip to Boston on the calendar, we usually make sure we go out for brunch at least once. This past trip in May was no exception. We toasted my birthday with coffee and a Bellini at Bistro du Midi, and then had a more low-key brunch the next day at Trident Booksellers and Cafe on Newbury Street.


Known by locals at "The Trident", this cafe/bookstore offers customers a cozy place to enjoy a wide assortment of wholesome food and beverages and encourages them to linger over a good book. When Stephen and I arrived at the restaurant, we discovered a line of people waiting to be seated spilling out onto the sidewalk. We debated over whether to secure a spot in line or to keep wandering down Newbury Street, but the line moved relatively quickly and we were seated at a table by the windows in no time.

To keep things simple, I ordered the Breakfast Sandwich ($7.95) with bacon and cheddar on an English muffin. When the sandwich arrived, I was pleasantly surprised to see that it was served open-faced. The eggs were cooked so the yolks were still a little runny -- just the way I like them! -- and the kitchen didn't skimp on the bacon. While it didn't exactly look "pretty" on the plate, it was a tasty sandwich, and I'd definitely order it again (and again and again). 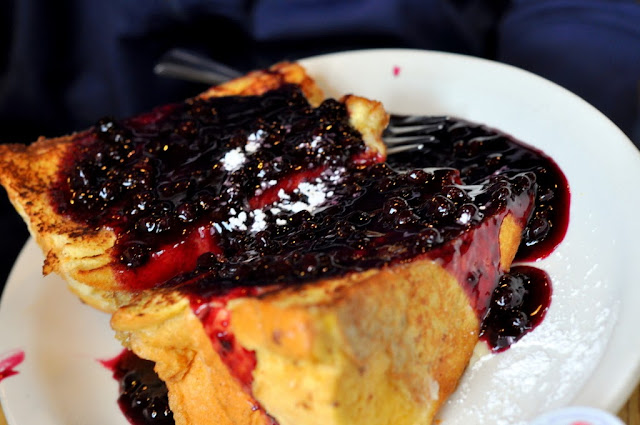 Staying true to form, Stephen ordered the Lemon Ricotta French Toast ($10.95). A layer of ricotta mixed with lemon zest was spread between thick -- and, I mean thick -- slices of Challah, and then the whole thing was topped with a sweet blueberry sauce. The French toast also came with maple syrup, but it certainly didn't need it.

Had I ordered that dish, I would have had to stop eating it after a few bites. I found the blueberry sauce overwhelming and it completely overpowered the delicate flavor of the lemon ricotta. Stephen and I both concluded that it would have been better to request the sauce on the side.

If you're looking for an affordable restaurant on Newbury Street, then definitely consider stopping by The Trident. They're guaranteed to have something on their menu that will appeal to all tastes. And, if you bring your laptop, you can take advantage of their free WiFi while you eat.