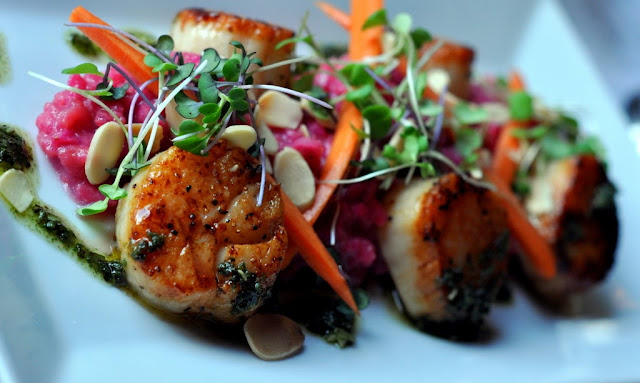 Those of you who are regular readers of Taste As You Go know that Stephen's in charge of preparing dinner on Wednesday nights. He's really risen to the challenge, making meals that push his culinary skills, and it's been fun watching him learn to love cooking.

But there those weeks when he completely forgets what day it is. By the time he remembers he's supposed to be cooking, it's too late to really start anything and we wind up ordering take-out or going out to eat somewhere. Stephen's always apologetic about it, but as I see it, a night off from cooking is a night off from cooking! 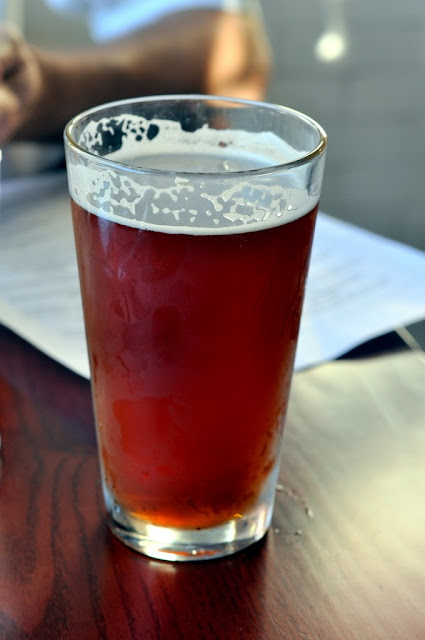 And that's how we ended up at Two Rivers Brewing Company in Easton on a Wednesday night not too long ago. Stephen's desire to skip his cooking duties morphed with our mutual desire to have a beer with dinner. It was just meant to be. 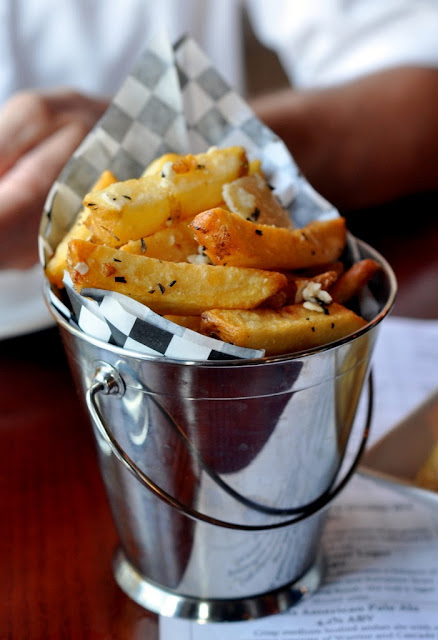 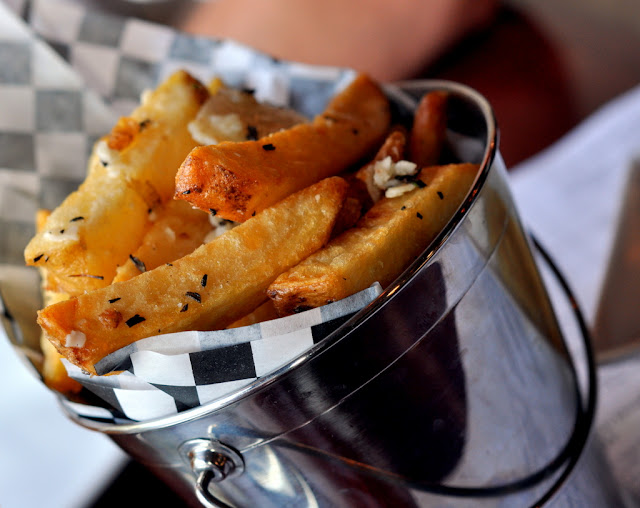 The hostess seated us at a table by the window, and our waitress skillfully helped us navigate the beer menu. I wound up choosing the Stoudt's Scarlet Lady, which paired perfectly with the bucket of Duck Fat Fries ($6.50) we ordered to kick off the meal.

Locally-sourced potatoes are fried in duck fat and then sprinkled with fresh rosemary, Pecorino Romano, and truffle oil before being served with a side of Dijon aioli. Crisp and flavorful, these fries were gone in no time. 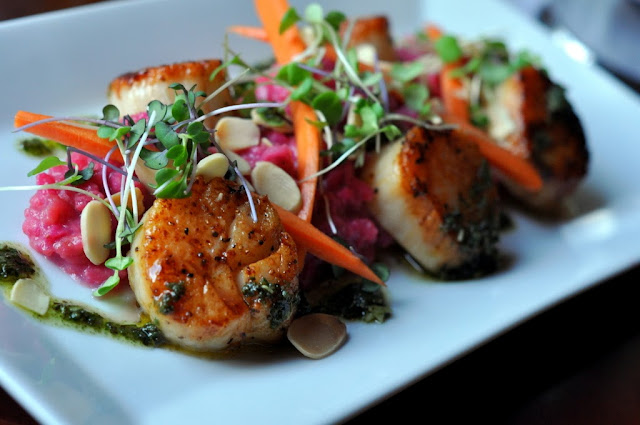 We considered indulging our inner-gluttons and ordering another bucket, but we came to our senses just in time for dinner to arrive at the table. I was torn between the Two Rivers Mussels and Frites ($15) and the Seared Diver Scallops ($17) and had to ask our waitress for some guidance. Let me tell you how happy I was that she steered me toward the scallops.

That's not to say the mussels wouldn't have been good... I'm sure they would have been great. But the diver scallops were amazing. They were served over a bed of red beet risotto and then topped with a Meyer lemon cream, micro greens, toasted almonds, macerated carrots, and a sage and rosemary pesto.

While it sounds like a lot going on, all of the flavors worked with one another, with the sweetness of the risotto bringing out the natural sweetness of the scallops. The carrots still had a bite of a crunch to them, so they added a lovely contrasting texture along with some acidity to balance out the risotto. And, did I mention the colors? The dish almost looked too pretty to eat! 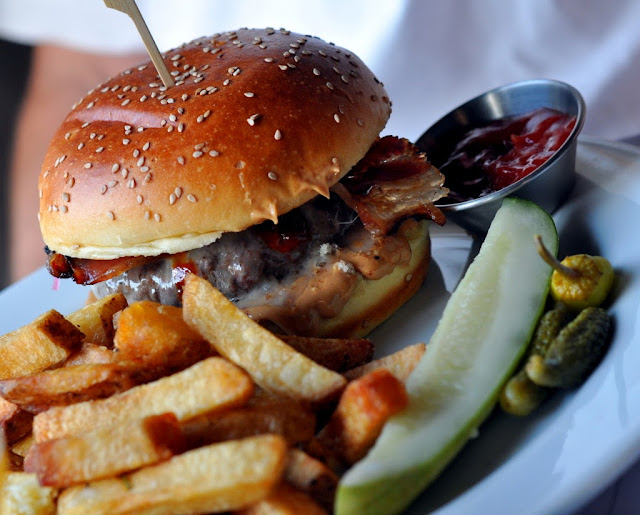 If you're wondering what Stephen ordered, then brace yourselves. He ordered the decadently rich Peanut Butter Bacon Cheeseburger ($15) featuring locally-sourced grass-fed, dry-aged beef. The beef patty is topped with bacon, sharp cheddar, peanut butter, praline dust (because... why not?), chili gastrique, and pickled shallots.

And on the side? A generous serving of golden brown Belgian frites and pickles. I thought I wouldn't like the combination of all of those ingredients, but I had a bite of the burger and thought it was surprisingly, and incredibly, tasty.

I'll be honest... I had my concerns when I walked into the restaurant since the space still felt like a dive bar. I wasn't really sure what to expect from the food. But it turns out I didn't have anything to be concerned about. It's clearly obvious that Executive Chef Jeremy Bialker knows what he's doing in the kitchen. I'm definitely looking forward to a return trip to Two Rivers Brewing Company!

Hmm... I just remembered that it's Wednesday. What are the odds that Stephen will want to skip cooking again in favor of eating dinner out in Easton? ;-)