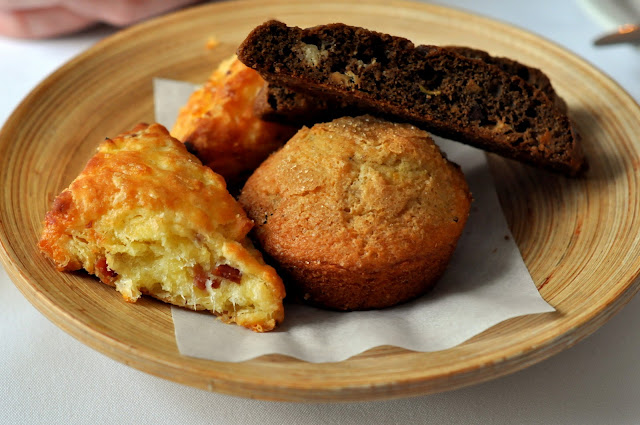 Stephen and I are home from our Florida vacation and have wasted no time in jumping back into our normal routines. For me, that means getting back to blogging after purposely taking a break. It felt strange to pull back from writing and posting updates on Facebook and Twitter, but I needed time to recharge. I was so grateful to Just Be for a few days.


When I sat down at my desk this morning and saw that the next post in my editorial calendar was my review about the anniversary brunch that Stephen and I had at Bolete Restaurant, I couldn't wait to get started. Unfortunately, it took my brain a little while to start forming sentences that I was happy with. I guess part of me is still on that beach in Longboat Key. *wink* 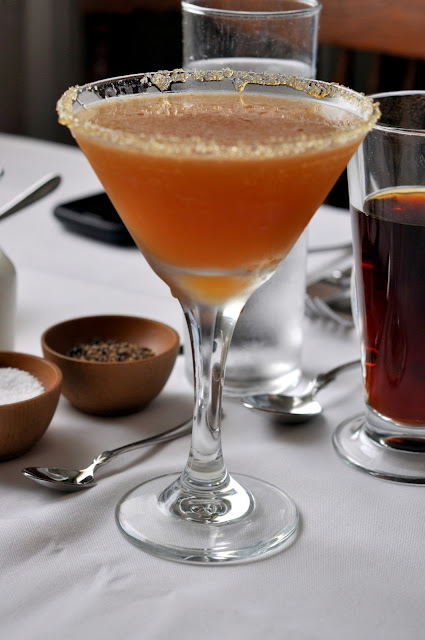 In honor of the special occasion, Stephen and I ordered a round of brunch cocktails to go along with our coffee. Since I prefer my morning cocktails to be on the sweeter side, I had the Not Your Grandmother's Greyhound ($14) made with Tito's vodka, roasted grapefruit juice, and brown sugar simple syrup with a sugar rim. Roasting the grapefruit adds a whole new layer of flavor, and instead of a strong tartness or bitterness from the fruit, you taste a mellow sweetness. As you're sipping the drink, you can hardly taste the vodka... which means these things are really easy to drink down. In fact, you might drink two or three of them before you even remember there's vodka involved! 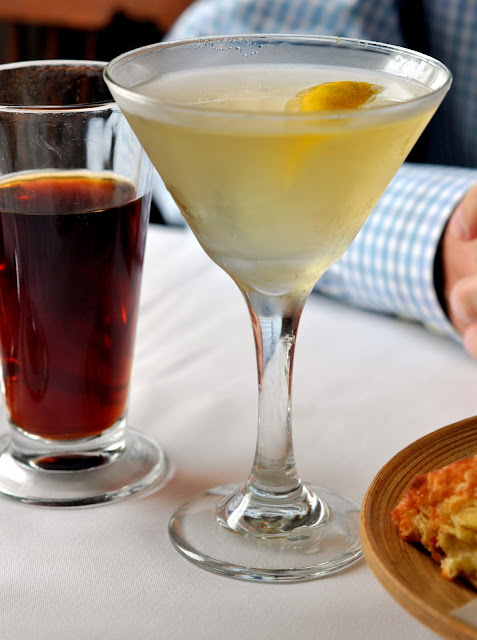 Stephen ordered the cocktail he's convinced is named after him. The Stephen's Elixir ($14) is a White Manhattan made with Shine White Whiskey, Benedictine, dry vermouth, and house-made orange bitters. After one sip, there's definitely no denying that there's alcohol in there. It's a really powerful drink, one that I would never attempt to consume before I've had a chance to lay down a solid base of food in my stomach. Stephen managed to get through about half of it before stopping. 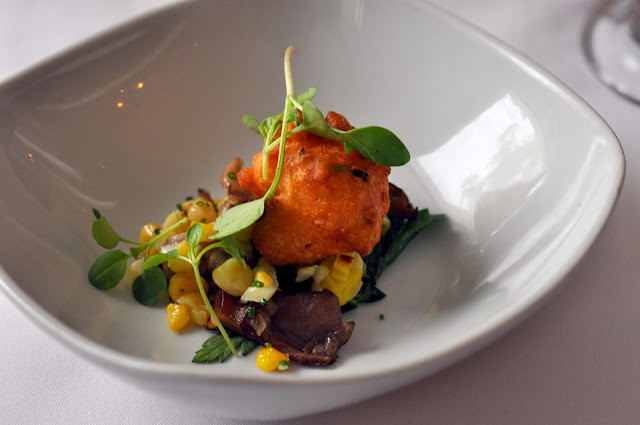 For my first course, I ordered the Roasted Teprovich Farm Corn Soup ($10) simply because it came with a Maine lobster and green tomato fritter. The flavor and texture of the soup and all its components was unparalleled, and I would have been completely satisfied to make a full meal out of it. Assuming I had ordered three bowls, of course. 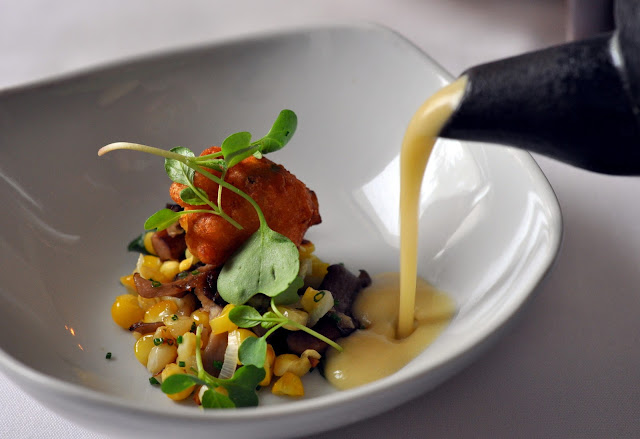 What really impressed me was the presentation. Our server brought out a bowl that had the fritter on top of a gentle pile of roasted sweet corn, leeks, and oyster mushrooms. Then, right there at the table, she poured the creamy and butter soup into the bowl from a kettle, moving the spout around the bowl as not to disturb the fritter or the contents underneath it. 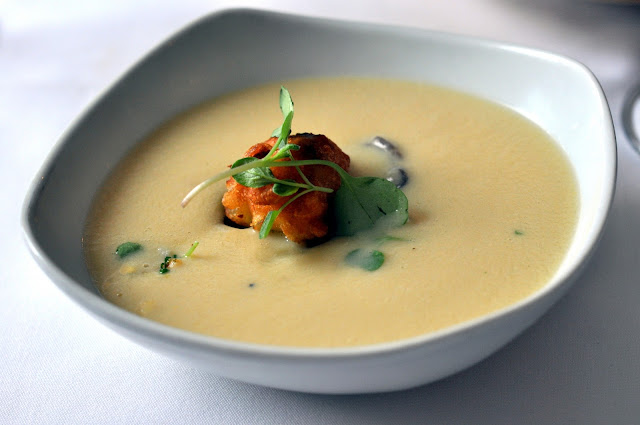 This thoughtful presentation kept the crispiness of the fritter intact and ensured that the soup was hot as it hit my lips. Pure bliss. 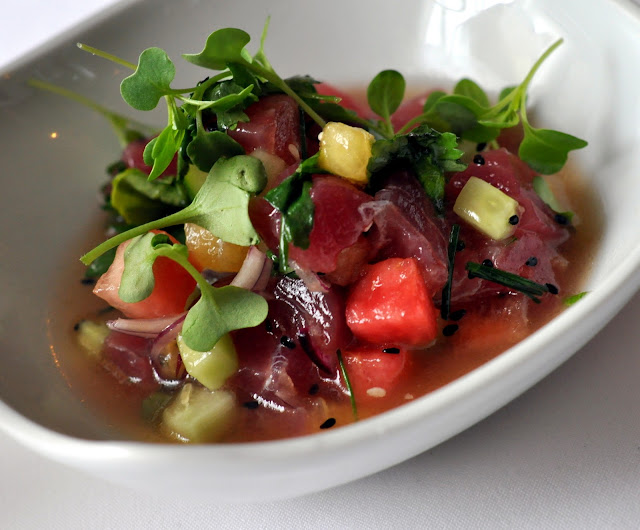 Stephen chose something a little lighter for his first course. The Yellowfin Tuna Tartare ($15) featured fresh tuna diced and tossed with cubes of local watermelon, cucumber, red onion, and cilantro. Then the whole dish was dressed with a sprinkling of black sesame seeds and just the slightest bit of watermelon broth. The sweetness from the watermelon and cucumber brought out the buttery quality of the fish, and we both marveled at the chef's sparing-but-effective use of the red onion. The onion wasn't overpowering and helped tone down the sweetness of everything else. This was summer in a bowl. 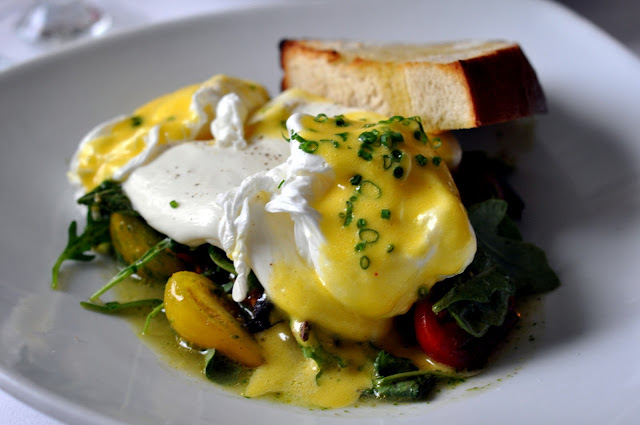 We were still raving about our first courses when our main courses came out. Although I was tempted to order the signature Eggs Chizmar, I opted for the Fresh Summer Farm Breakfast ($14) instead. Halved heirloom tomatoes from Liberty Garden are tossed with basil and arugula leaves and Teprovich Farm uncured onions and then topped with house-made mozzarella, two poached eggs, and the lightest hollandaise sauce I've ever eaten. The eggs are served with a thick slick of toasted brioche for dipping into the creamy yolks and for sopping up all the juice from the tomatoes. I loved every part about this dish and was glad that I pushed myself to try something new (the Eggs Chizmar is already an established favorite of mine). 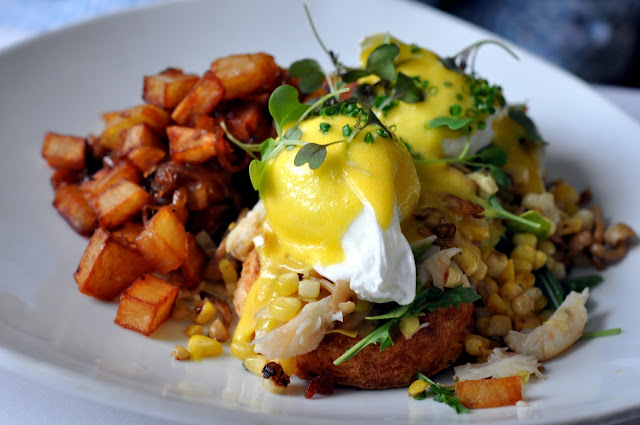 Stephen went all-in and ordered the Summer Eggs Benedict ($16). House-made biscuits are topped with Peekytoe crab, Teprovich corn, leeks, arugula, and beech mushrooms and then topped with poached eggs and hollandaise sauce. On the side? Crispy thyme potatoes with caramelized onions.

I swear. We haven't found one dish at Bolete that hasn't impressed us. After offering a full bottom-lip pout, Stephen let me try a bite of his breakfast, and I loved out the sweetness of the crab and the corn played off one another. He loved the flavors so much that he completely ignored the pile of potatoes sitting on the other side of the plate... which worked out really, really well because I was sneaking bites of those potatoes as he ate. 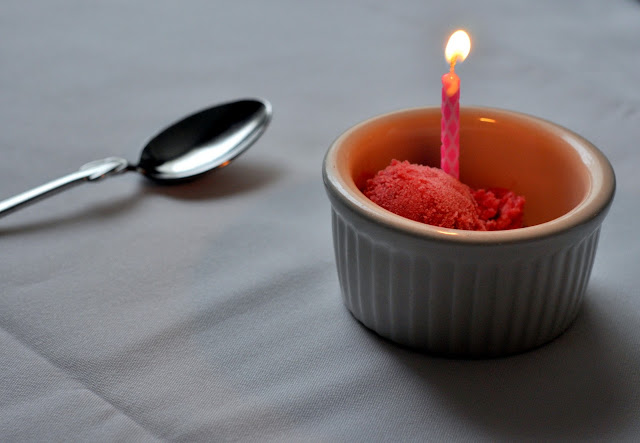 Just when we thought we couldn't eat another bite, the kitchen brought out a tiny dish of Raspberry Sorbet with a candle in it as a special anniversary surprise. So, so classy.

Thanks to everyone at Bolete for making our brunch so unforgettable. Perhaps we'll have to make this an anniversary tradition for as long as we're in the Lehigh Valley!