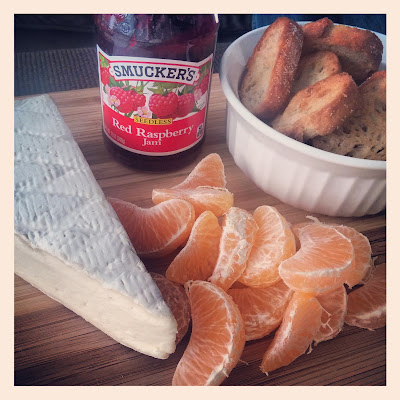 So far, 2014 is off to a strong start. Stephen and I originally intended to have a low-key New Year's Eve celebration but then wound up having friends over at the last minute. We spent the evening eating great food and drinking really great wine and just enjoying each other's company.


Later in the week, Stephen and I hunkered down to prepare for the bitter cold and 2014's first snowstorm. For me, that meant stocking our kitchen with some goodies, spending time on Friday experimenting with a new barbecue sauce recipe, and jumping right into work on my first freelance assignment of the new year. I know we're less than a week into January, but I'm already feeling extremely positive about what's to come.

Anyone else feeling that way?

For this week's Menu Plan, I'm relying on a mixture of leftovers, tried-and-true favorites, and meals inspired by some of my fellow food bloggers. I can't wait to see how everything turns out!

So, I mentioned that I was experimenting with a new barbecue sauce recipe. Let me be more specific... I was experimenting with a new bourbon barbecue sauce recipe. Tangy and delicious, it had all the flavors I was looking for and it made the perfect sauce for the Pulled Chicken Sandwiches that I made for yesterday's dinner. Stephen and I will be tackling those leftovers tonight.

And, don't worry, the recipes for the barbecue sauce and the sandwiches are coming. I promise!

Monday: Spicy Thai Peanut Noodles (from Buns In My Oven)

I'm putting my jar of Homemade Taco Seasoning to good use and declaring this Tuesday a Taco Tuesday. I'm still undecided about whether to use ground beef or ground turkey, though.

Because it's been a while since Stephen and I have had a nice salad for dinner. And because vegetables are good for us.

Friday: Pizza with Spinach and Ricotta