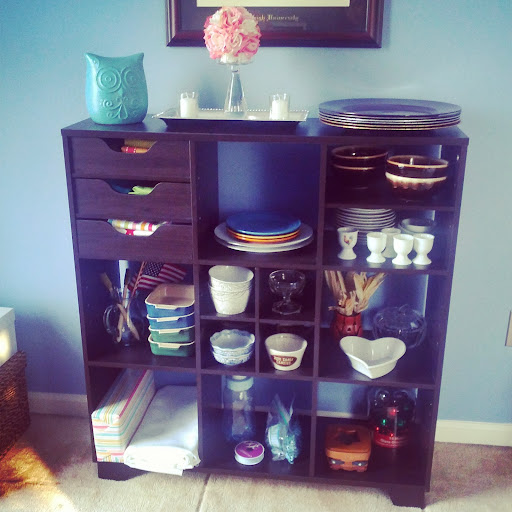 Last week, I took a major step forward in terms of organizing my home office. I finally convinced myself to use some of my freelance earnings to buy a shelving unit where I could store all of the food props I've accumulated over the past year. The props used to reside all over the floor in my office, making moving around in the small room relatively difficult... especially in the dark!

Now that things are put away and I've reclaimed the floor space, I feel much, much better about working in my office. I'm so motivated that I might just move onto a paperwork organization project next.


Although we're married and I've lived in our house since I moved into it in June 2011, I still view it as Stephen's house. The majority of the furniture is his (rather than mine or ours) and it still feels like a bachelor pad at times despite my best efforts. (Sorry, honey, but it's true.) That's why I'm so, so grateful that we turned one of our guestrooms into an office for me. For the most part, it's my space (the closet is mutual storage space... for now *wink*), and I can go there to work without distraction or worry that I'm going to disturb Stephen.

I still have a long way to go before the office looks and feels the way I want it to, but it's a start, right?

But enough about decorating and organization... let's get to this week's Menu Plan.

Our future brother-in-law is due to visit us on Monday, so we're planning on going out for dinner in honor of the occasion. Assuming we don't get buried by the snow from yet another "epic" winter snowstorm.

That reminds me... I should check our supply of Homemade Taco Seasoning to make sure I don't need to pick up any more spices when I throw myself into the pre-storm chaos at the grocery store.

I have the chicken in the freezer right now, leftover from a big batch of braised chicken that I made a few weeks ago. I figured I'd give myself a bit of a break this week. ;-)

Friday: Pizza with Arugula and Prosciutto