Ultimate Chocolate and Peppermint Brownies {and a Hershey's Giveaway}

What is it about the holiday season that makes me crave the combination of chocolate and peppermint? Thank goodness these super-rich brownies have both! 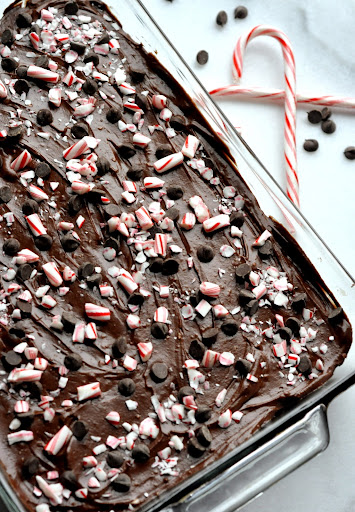 Am I the only one out there who starts craving the combination of chocolate and peppermint at this time of year? I don't know what it is about those two flavors together that just screams the holidays, but I can't get enough of it.

(Maybe it just feels that way now that I'm pregnant. When the cravings are there, they are Real.)

Over the weekend, I teased you all on Instagram and Facebook with a picture of the little baking project I was working on. Of course, I did everything within my power to make sure the brownie recipe featured a whole lot of chocolate with a tasteful sprinkling of peppermint.

In a word? Heavenly.

Chocolate-lovers will be fighting with each other to get the last brownie in the pan. With cocoa and semi-sweet chocolate chips and a rich homemade chocolate buttercream frosting, I promise these brownies will be the holiday treat your friends and family members will be raving about. I should know -- I brought this batch to a holiday party and received compliment after compliment  about them.

Keep reading to get the recipe and to enter to win my latest giveaway sponsored by the generous folks at Hershey's!


This all started when I received a fun package in the mail full of Hershey's baking staples...


... and an assortment of Hershey's Recipe Cards featuring some of their most popular baking products. As soon as I saw the recipe card for the Ultimate Chocolate Brownies, I knew I just had to try and out. But not without putting a little twist on it to make it my own.

And to satisfy that major craving for chocolate and peppermint that I was talking about earlier.


Thus, my Ultimate Chocolate and Peppermint Brownies were born!

Did I say that these brownies were heavenly yet?

Everything about them was heavenly -- the aroma filling the kitchen as they baked and cooled, the sugary rush from the chocolate buttercream frosting that I spread over the top, and the look of the finished product after I sprinkled on chocolate chips and pieces of crushed peppermint.

But I'm getting ahead of myself.


While the brownies are cooling, whip up a batch of Chocolate Buttercream Frosting. Try not to eat all of it while you're waiting.

But sneaking a spoonful or two won't hurt!


Once the brownies have cooled, you can go ahead and spread all of that sinful buttercream frosting on the top of them.

It wasn't until this point in the process that I realized that I should have sifted all the little lumps of powdered sugar out of the powdered sugar before making the frosting. Sifting would make a prettier frosting, but I found that the lumps didn't do a darned thing to detract from the overall flavor of the brownies.

Plus, I still had a layer to go, so I didn't very much care about the lumps. ;-)

To finish the brownies, grab some more chocolate chips and some crushed peppermint (I used candy canes) and get ready to get artistic. It's time to decorate!


Go as crazy with the toppings as you want.

See? Now you can't even tell there were lumps in the frosting. ;-)

And, for those of you who are just dying to know what these brownies look like on the inside...

Recipe by Michelle Rittler, Taste As You Go \\ Adapted from Hershey's

Recipe by Michelle Rittler, Taste As You Go \\ Adapted from Hershey's

Way back in the beginning of the post, I promised you a giveaway. Well, here it is!

Because holiday baking season is in full swing, I've partnered with the fine folks at Hershey's to offer my fabulous readers a chance to win a fun prize.

Hershey's will be providing one (1) winner with a Hershey's Baking Staples Prize Package! This package includes the following: