I admit it. I've been busy. Despite making some minor improvements to Taste As You Go within the past couple of days (feed readers, please click through to see!), I haven't posted any new content for a week. *blush*

It's not that I don't have anything to write about or that the desire to do so has dwindled away... I've just been busy. Since Sunday, alone, I've attended a Super Bowl party, an Annual Fund breakfast for my high school, an Exec Board meeting for the Alumnae Chapter of my sorority, and Happy Hour with friends from college. Today, I'll be meeting up with more friends for margaritas and a movie, visiting my old grad school roommate, and closing the evening with a concert up at the Italian Academy at Columbia.

So, in an attempt to catch up, here are two quick restaurant reviews. 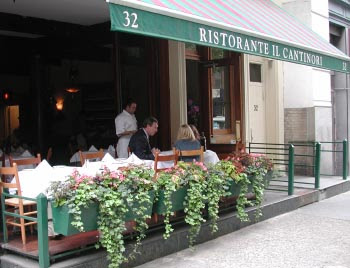 Il Cantinori is one of those restaurants I would probably skip if it weren't Restaurant Week. (Psst! Restaurant Week in New York has been extended!) If you look at their menu online, you'll probably notice, as I did, that they don't list the prices of their dishes. For me, that's usually a sign that I can't afford to eat there. However, I had to attend an Exec Board dinner there at the end of January, so I went into the restaurant resolved that I would be smart about the money I spent.

Being smart meant skipping a glass of wine. Their house wines were priced between $12-$14 a glass, and our server couldn't remember which price went with which wine. After I had asked him how much a glass cost and told him I'd think about it, he thought that meant, "Yes, please bring me a glass of your Pinot Grigio." I immediately asked him to take the wine away after he put it in front of me and he tried to convince me that I had, indeed, ordered it. Awkward.

Their Restaurant Week menu didn't really appeal to me, so I ordered the Risotto del Giorno (Risotto of the Day) because the combination of spinach and fresh mint sounded intriguing. Unfortunately, I wound up paying $23.50 for a dish of risotto made with white rice (I didn't even know you could do that) that was heavy on the mint, light on the spinach, and in desperate need of salt. As I was eating it, I secretly wished that I had asked the server to grate more fresh Parmesan cheese on top. To say that I was disappointed in the meal was an understatement.

I skipped dessert and rounded off the meal with a cup of coffee. Thankfully, the coffee was brewed perfectly and only cost me $2.50. A bargain. If it hadn't been for the amazing company of the group of women I was with, I would have written off my dinner at Il Cantinori as a failure.

I had plans to meet up with friends from college last night for some post-work drinks. The original plan was to grab a beer or two at Stout but the place was packed due to the game at the Garden. After everyone had gotten to the bar and after most of us had consumed a beer, we relocated our mini-reunion to Jack Demsey's, which was right down the street from Stout.

Since we were going to have some pickin's while having another drink, we were seated upstairs. It wasn't too crowded, which was nice, and the service was friendly and quick. We decided to share the Medley ($16), which included chicken wings (your choice of buffalo wings or barbecue wings), chicken fingers, mozzarella sticks, and potato skins. For $16, it would have been nice to get a little more food than we got, but all of it was really tasty. (Note: the prices we paid were higher than those listed online.)

Once we got sight of the Medley, we knew that wasn't going to be enough food to hold us, so we tacked on a side order of French fries ($4.95) and some fried calamari. And Kitty went all-in and ordered the Sheperd's Pie. I'm surprised none of us keeled over and died from heartburn by the time we were finished! All of the food was really good and surprisingly light for fried food. A great choice for a post-work meet-up for beer and bar food. Just beware.... On Friday nights, they have a live comedy show upstairs. If listening to a guy with a microphone struggle to make one person in the room laugh is your thing, then sit upstairs. If not, I'd ask to be seated downstairs!

Sue said…
That's a shame. I always heard Il Cantinori was good. Thank goodness you weren't paying full price to have such a bad meal. I admire your strong mindedness in insisting to the waiter to take the wine back. How outrageous that he did that in the first place and then argued with you about it!

Isn't it funny how your experience at a regular bar-type place was so much better than a fancy restaurant?
February 07, 2009

Angie said…
I find the insistence of the waiter a little strange...you'd think that restaurants would begin to follow the "customer is always right" rule...specially after articles like these are being written. I guess that's a mental note not to visit the place then...
February 07, 2009

Michelle Rittler said…
Sue - Before going to dinner at Il Cantinori, I found reviews that raved about the restaurant and reviews that ranted about it. I was praying that those who had ranted had simply gotten it wrong, that they went on an "off" night. But my experience there makes me wonder whether the quality of the food and the service is starting to go downhill from what it used to be.

I did, however, pay full price for my dinner. I didn't opt for the Restaurant Week menu, so I did pay the full $23.50 for the risotto. Such a shame. As for the wine, I certainly wasn't going to let the waiter guilt me into paying $14 for a glass that was barely half full! No way!!

Maybe the people at Il Cantinori should head uptown and take a few lessons from the people at Jack Dempsey's. Minus the lame comedian, of course. ;-)
February 07, 2009

Michelle Rittler said…
Angie - I'm actually not surprised the waiter tried to convince me that I had ordered the wine. He was on the rude side right from the start! Perhaps he was afraid the $14 would come out of his paycheck if I didn't just take it. If that's the case, he should be a bit more careful before pouring the wine!
February 07, 2009