Brunching in Brooklyn at DuMont 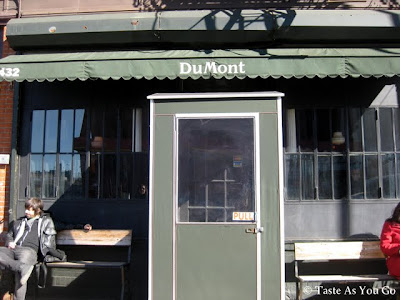 Something became glaringly clear to me the other day as I was updating the archives of Restaurant Reviews on Taste As You Go. I have failed in taking advantage of my proximity to the G train. I don't eat in Brooklyn nearly as often as I should. I've only reviewed one Brooklyn restaurant -- The River Cafe -- and that was back in 2008, back when I was still figuring out this whole blogging thing.

Thankfully, I met up with my friend Mary for brunch in Brooklyn not too long ago, and I can begin remedying this horribly embarrassing situation. 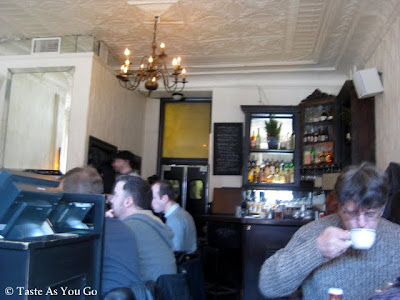 While DuMont boasts a spacious outdoor seating area, complete with a treehouse, the actual interior is tiny. The über-planner in me was relieved that we thought ahead and made a reservation. Not only were we seated right away, but we were also given one of the best tables in the place (in a little nook, next to the window). 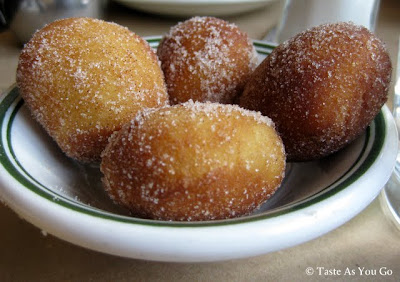 After we placed our orders, Mary and I were given a complimentary dish of Cinnamon Sugar Doughnuts to nosh on while we sipped our coffee. The gesture was appreciated because we were both extremely hungry, but I was disappointed because the doughnuts tasted as if they had been sitting out for a while. They weren't warm and were slightly hard. Nothing like the Brioche Doughnuts at Craftbar or even the Housemade Raised Donuts at The Standard Grill. 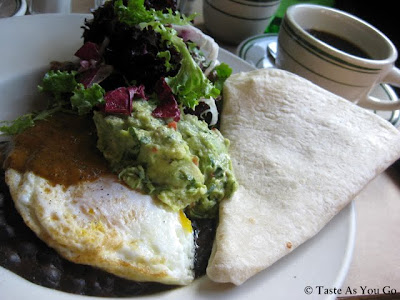 Now, I spent a good deal of time studying Dumont's brunch menu before making my way out to Williamsburg, and I had decided that I wanted the Duck Confit Hash ($13). Unfortunately, they were already out of it by the time Mary and I got there! So, I ordered my second choice, the Huevos Rancheros ($11) -- two any-style eggs served with a flour tortilla, charred tomato salsa, black beans, cheddar cheese, and guacamole. The eggs were cooked perfectly, and I derived much pleasure from tearing off bits of the tortilla to dip in the decadently runny yolks. Since I tend to like things on the spicy side rather than on the smoky side, I would have preferred a little more heat in the salsa, but, honestly, I enjoyed the dish so much, I didn't leave a trace of food behind.