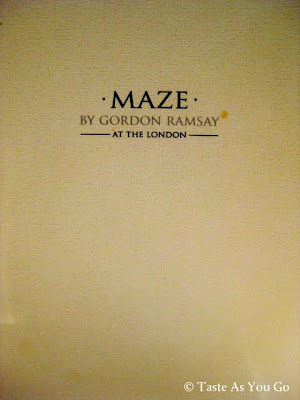 Confession: the main reason I suggested eating lunch at Maze at The London NYC to my friend Meg was to see if the risotto was worth it. Anyone who has ever watched Hell's Kitchen knows that risotto is one of the dishes Gordon Ramsay forces the contestants to prepare during the dinner service. And risotto is often one of the dishes he screams about when a chef puts up something that's seasoned poorly or prepared to the point of inedible. When I saw that Chef Ramsay's restaurant at The London NYC was offering a lunch special for Restaurant Week, we immediately made a reservation to check out the situation. 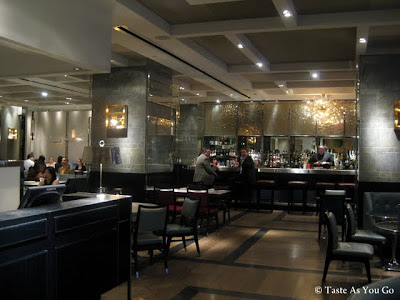 Tucked into The London NYC Hotel in Manhattan, Maze features an elegant interior, from the delicate blue color of the walls and the upholstery to the dark wood of the chairs and the metallic accents of gold and silver throughout the restaurant. When I sat down at our table, it almost felt as if I were being transported back to the early half of the twentieth century, when Fred Astaire and Ginger Rogers helped propel the popularity of the musical film. I half expected them to come out and entertain the patrons with a song and dance. 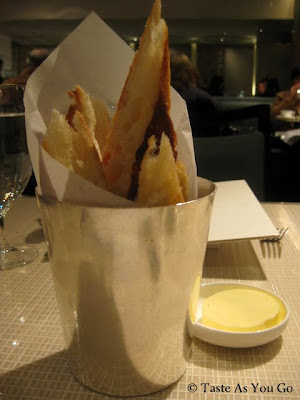 I was a little early, so instead of pulling out my Kindle to catch up on some reading, I enjoyed the ambiance and snacked on some bread and butter while looking over the Restaurant Week menu for the thousandth time. I loved how the bread was presented in a paper-lined silver bucket. 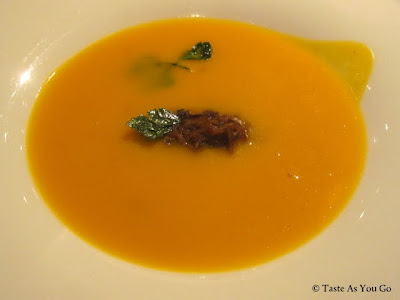 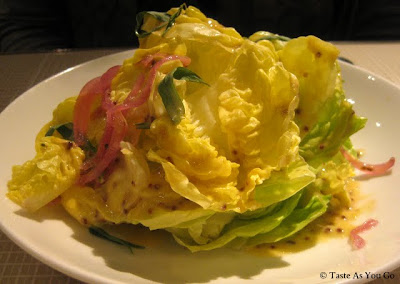 For the first course, I ordered the Hubbard Squash Soup with Ragout of Braised Duck and Black Truffled, while Meg had the Butter Lettuce Salad with Pommery Mustard Vinaigrette, Tarragon and Picked Red Onions. Look at the color of that soup! Such a vibrant shade of orange! When the soup was placed in front of me, the ragout of braised duck was the only thing sitting in the bowl. Our server poured the soup into the bowl at the table, allowing only a little bit of the duck to peek through. Points for presentation for sure. The soup was silky and smooth and light despite its relatively thick viscosity. The squash picked up the bit of spice from the braised duck, and the dish was brought together by the subtle truffle flavor. I was very relieved that the black truffle didn't overwhelm the dish. As for Meg's salad, I only had a bite because it was covered with the mustard vinaigrette (I'm not a fan of mustard). The lettuce was crisp and fresh and I was surprised that I didn't mind the intense mustard flavor of the vinaigrette that much. It just worked. 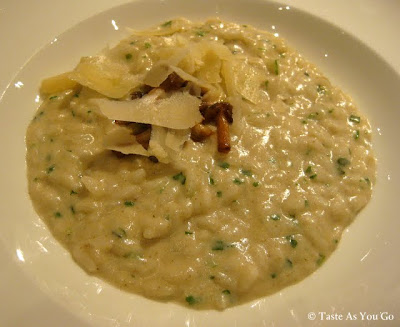 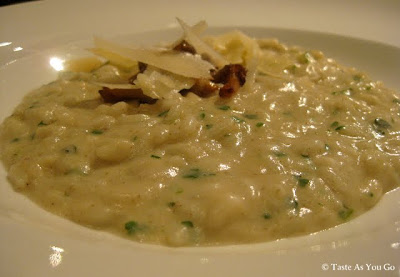 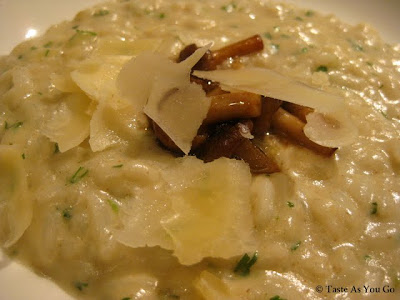 Second course -- the much anticipated risotto. Meg and I couldn't decide who'd forfeit ordering the Carnaroli Risotto of Sunchoke with Honshimeji Mushroms and Mascarpone (we typically try to order different things in order to experience more of the menu), so we called it a draw and told our server to bring us two plates. Now I know why Chef Ramsay gets all excited on Hell's Kitchen when the risotto is prepared to perfection. Because once you've tasted risotto like this, you don't ever want to be served crappy risotto again!

The risotto had the tiniest bite to it and was super creamy and rich thanks to the finishing addition of mascarpone. You know how you hear on Top Chef or Chopped (yes, I'm mentioning different television shows that air on a different networks... try and stay with me) that risotto should never stand up on its own? That it should run to the edges of the bowl? Um, hello! Gordon Ramsay knows what he's talking about when it comes to risotto. Meg and I cleared those plates in record time and enjoyed the garnish of the caramelized mushrooms. They added a whole different layer to the dish and helped to cut the richness a bit. 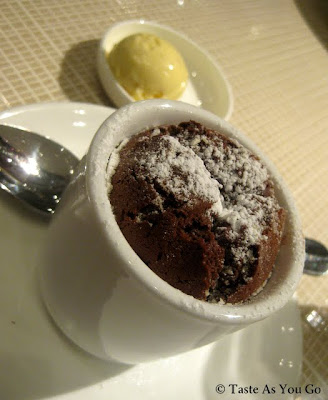 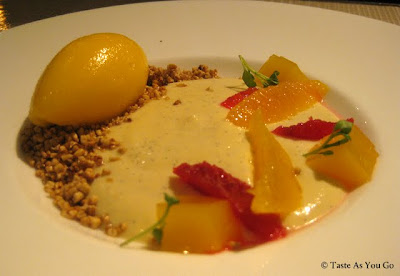 If we didn't have a third course (dessert!) coming, I think I would have asked for another helping of risotto. However, Meg and I had to power through to the end of the meal! For me, the Valrhona Chocolate Fondant with Green Cardamom Caramel and Sea Salt and Almond Ice Cream. For Meg, the Vanilla Custard with Citrus Fruits, Brown Sugar Oats and Mandarin Sorbet. There was no contest here. Our clear favorite dessert was the chocolate fondant (also known as a lava cake) because it perfectly married the rich velvety sweetness of the chocolate with the sharp saltiness of the ice cream. While the custard was an acceptable end to the meal, it was a little on the thin side. The brown sugar oats added a lovely contrasting texture, but they tasted stale and were a chore to eat.

Considering we went for lunch and ate multiple courses, the portions at Maze at The London NYC were adequate in size. The establishment is no longer offering the Winter Restaurant Week menu, but they do have a prix fixe option on their standard lunch menu: any two courses for $26 or any three courses for $35. If you go, be sure to get the risotto.