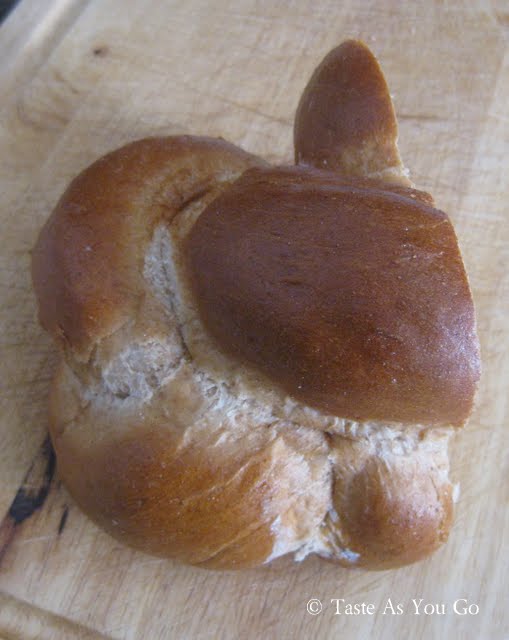 As a special midweek treat, we have a post all about challah written by my Twitter friend Hillary Kwiatek. Hillary's post was originally supposed to appear on Taste As You Go when I was in Knoxville last week, but I had to make an unexpected adjustment to the schedule after hearing the news of the death of my cat. Thankfully, Hillary has been extremely understanding about the delay.

So, without further ado, here is Hillary's post.... Thanks for writing, Hillary!


My mom's "back to nature" phase coincided with my dad's "back to Judaism" phase in the 1970s. So, in addition to making her own yogurt and sprouting mung beans, Mom started baking the traditional Jewish egg bread, challah, for Friday night sabbath dinners in our shag-carpeted New Jersey home.

How she managed to produce gorgeous golden twisted braids while maintaining her perfect manicure remains a mystery, but we all looked forward to the moment we had finished the blessings and could tear off chunks of the bread. It was especially yummy when dipped in the pan juices of the roast beef.

Along with his daishiki and perm (don't ask), Dad's noble effort to instill religion in the family faded in due time. Then Mom went back to work. The Salton yogurt machine migrated to the back of the cabinet, and, somehow, there was no longer any time for those beautiful loaves.

But memories of homemade bread die hard. So when I moved into my first apartment, I asked Mom for her recipe. More importantly, I asked for the secret to crafting the signature shape -- a handsome braid that is plump in the center and tapered slightly at both ends. It took a bit of practice, but, soon, I was a pro. Many friends have asked for the technique over the years, and I'm happy to share it with you today. 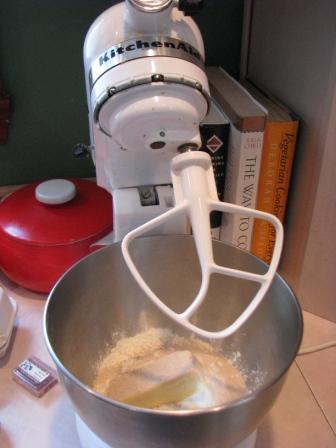 In a large bowl (I use my Kitchenaid mixer), combine yeast, 2 cups of flour, sugar, salt and butter (or margarine). Slowly add the hot water to the dry ingredients and then beat at medium speed for 2 minutes. Stop the mixer and scrape down the sides. 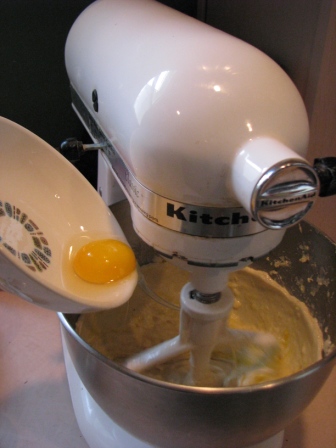 Start the mixer up again and gradually add the eggs and egg white. Beat on high for 2 minutes. Stop the mixer and start adding in the rest of the flour. At this point, it's best to take the mixing blade off and mix the batter with a wooden spoon with swift strokes. Take your time and let the flour absorb as you mix so that you can sense when you've hit the moment in which the dough is no longer overly sticky. Then, add just a bit more flour so the dough cleans the sides of the bowl. 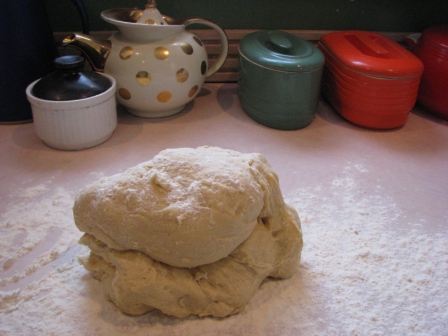 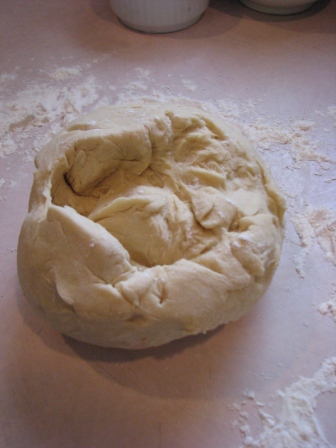 I used to love to hand-knead my bread, but now, in the interest of convenience, I use the dough hook on my Kitchenaid for the majority of the kneading and then hand-knead the bread toward the end when the dough starts feeling springy and smooth (total of 6-8 minutes of kneading time). You'll know you've kneaded long enough when the dough feels really alive under your hands. It's a lovely sensation -- one of the great rewards of baking your own bread! 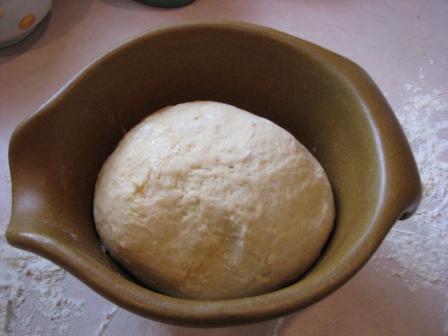 Lightly oil a mixing bowl and place the dough inside it. Cover the bowl with a towel or plastic wrap. Put the bowl in a warm, draft-free place for about an hour until the dough doubles in size. In the winter, I usually put my bowl on top of a radiator. 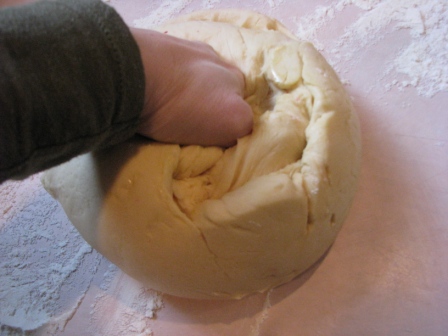 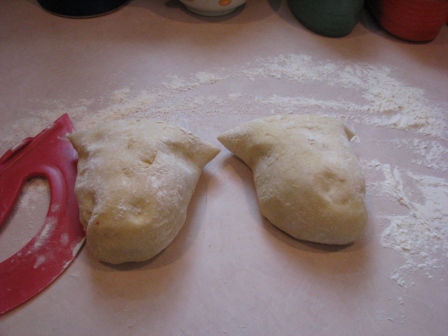 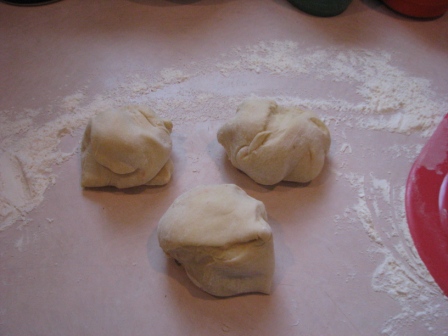 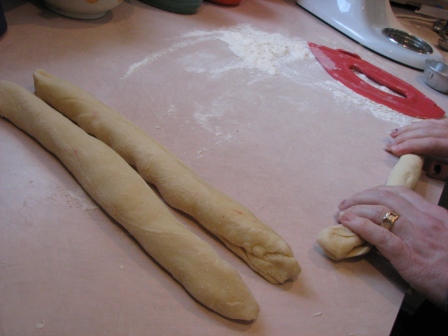 Scoop the dough onto a floured countertop and punch it down to get the air bubbles out. Divide the dough into two even ball and set one aside. Divide the other ball into three small, equally-sized balls. Roll these balls into long thin ropes, about 12 inches long. If the dough is resisting rolling, let it sit a few minutes to relax before trying again. Place the three ropes side-by-side, about 1/2-inch apart from each other. 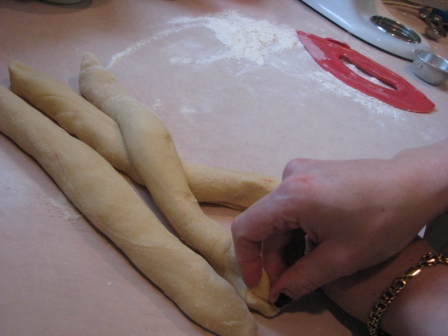 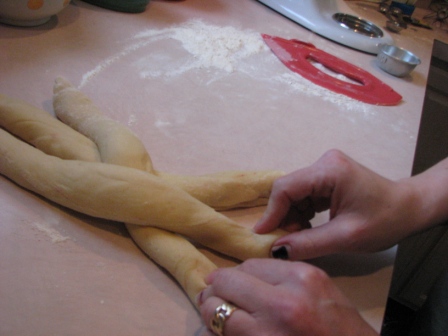 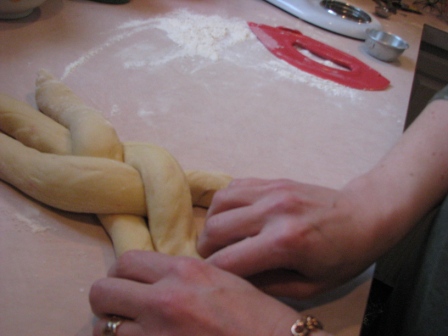 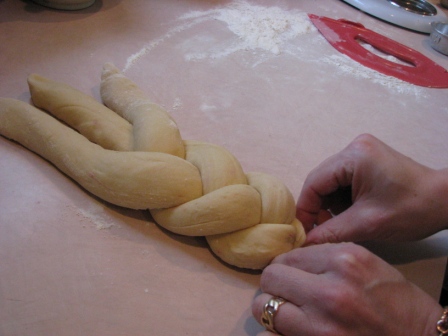 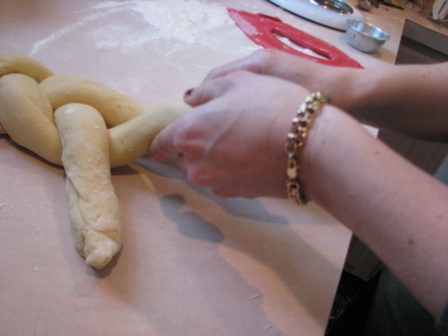 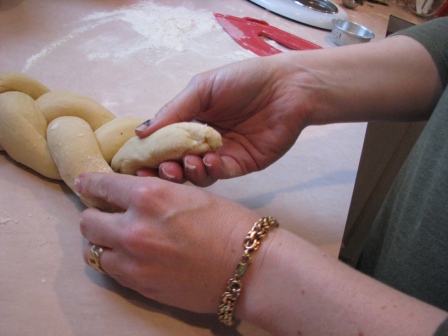 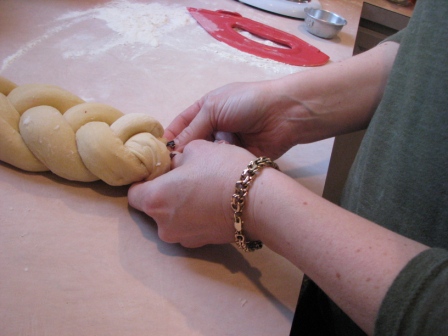 Start in the MIDDLE and work downward. Take the rope on the right and place it over the middle strand so that it is now the rope in the middle. Do the same with the rope on the left. Alternate in this manner until you reach the end of the ropes of dough. Take the ends and fold them under the loaf, pinching them together. You will now have a half braided loaf.

Gently pick up the loaf and turn it 180 degrees so the unbraided strands are now facing down. Start again with the right on the right, but this time, weave it UNDER the middle strand so that it becomes the center strand. Do the same with the left rope and alternate in this manner until you reach the end. Once again, tuck and pinch the ends. If you've done this properly, you will have an evenly braided loaf. If you want the loaf to be a bit plumper, you can gently pick it up and press the ends toward the middle, compacting it slightly. Or, you can keep it a bit longer and more slender. It's an aesthetic preference. 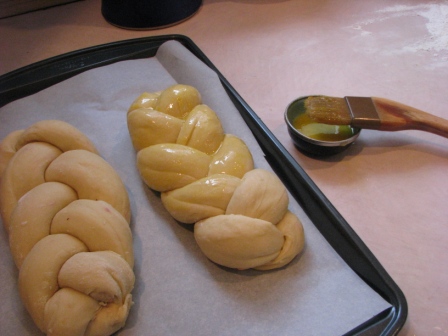 Follow the same procedure with the second ball of dough. Then place the loaves on a lightly greased baking sheet. Make the glaze with the egg yolk, sugar, and water and brush the glaze onto the loaves. At this point, if you like, you can sprinkle poppy seeds or sesame seeds on the loaves for decoration. I keep mine plain since my kids don't like seeds. 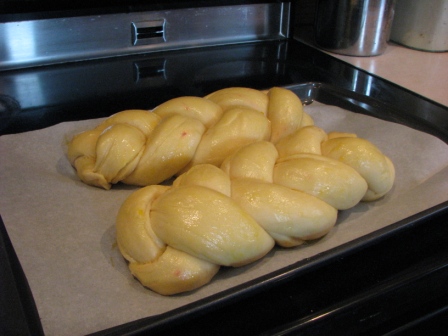 Don't cover your loaves. Return them to the warm draft-free spot and let them rise another hour. Meanwhile, preheat the oven to 400°F. 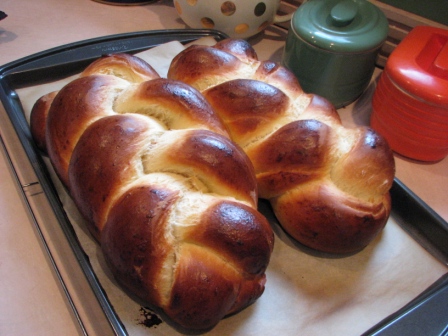 Bake the loaves for about 30 minutes. (I usually set my timer for 25 minutes and keep an eye on the loaves so they don't get too dark.) When you remove the loaves from the oven, take care, as they will remain fragile until they have cooled. Carefully put them on a cooling rack to rest.

Yes, it takes about 3 hours to make two loaves of challah. All I can say is, trust me. It's worth the effort. The bread is a show-stopper and tastes so much better than the sad air-filled store-bought version. Your dinner party guests will be in awe. 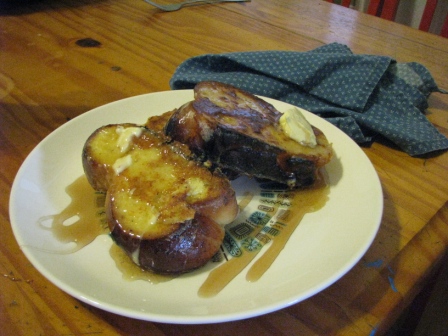 Just be sure to hide one of the loaves, or there will be nothing left to make French toast with in the morning!

If you're looking for a French toast recipe that uses challah, try Taste As You Go's Orange Whole Wheat Challah French Toast.