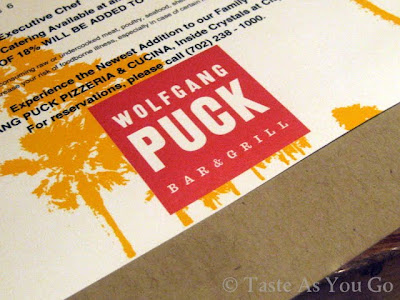 Just when I thought I had said everything I had wanted to say about April's trip to Las Vegas, I find a handful of forgotten photos from our dinner at Wolfgang Puck Bar & Grill at MGM Grand. Looking at them now, I could very well scrap the review and pretend the meal never happened, especially since the dinner was a disappointment. But there's a lesson to be learned from the experience.


Having a celebrity chef's name on the sign out front does not mean you're going to receive the A-list treatment while you're inside. 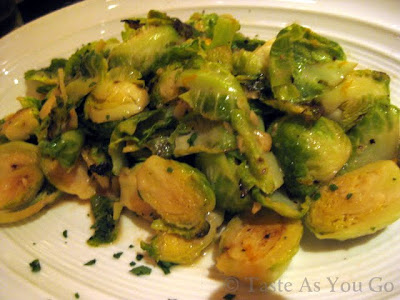 The meal started off on shaky ground. While we didn't have to wait to be seated, we had to deal with a high level of cigarette smoke lingering in the air from the people who were sitting at the slot machines less than fifty feet away. Yes, I know smoking is permitted inside casinos, but I've been relatively spoiled in New York, where smoking is not allowed inside of restaurants. Trying to ignore the smell proved extremely difficult, especially for me.

Also, we had a direct view into the casino, which meant we heard everything that was happening around us, from the unfiltered conversations to the pinging of the machines. If you're looking for a place to enjoy a quiet meal (or even a moderately loud one), then skip Wolfgang Puck Bar & Grill. Unless you like practically sitting on the laps of the people dining at the next table over. Then, by all means...

Of the various items that we ordered off of the dinner menu, the Caramelized Brussels Sprouts stood out the most. Our server raved about them so much, two of us ordered them to go "on the side" of our entrees. Given that we each ate one sprout apiece, we could have done perfectly well with one order.

The Brussels sprouts were barely cooked, hardly tender at all, with next to no caramelization. We were expecting to be dazzled by these sprouts, anticipating some type of revelation that only Wolfgang Puck could provide. Unfortunately, the Brussels sprouts we received were extremely bitter and showed us that the chef on the vegetable station that night just didn't care.

We notified our server that we did not care for the Brussels sprouts, explaining that they weren't cooked all the way. Rather than apologize for the error or offer to have the kitchen prepare another order, he huffed off and just left the plates of vegetables on an already crowded table.

At least we weren't charged for the sprouts.