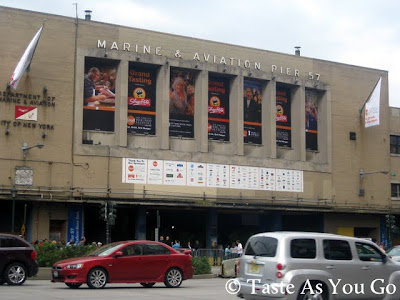 Buitoni provided me with the ticket to Saturday's Grand Tasting at the 2011 Food Network New York City Wine & Food Festival. I did not accept monetary compensation for this opportunity. All opinions expressed are my own.

Ever since I moved to Pennsylvania, the time I’ve spent in Manhattan on the weekend has decreased exponentially. Sunday brunch excursions have been relocated from Murray Hill and the Village to various spots around the Lehigh Valley. In fact, before I partnered with Buitoni for the Food Network New York City Wine & Food Festival, I could barely count the reasons for making a weekend trip into the city on one hand. Now I finally had cause to “take the Bridge” for something other than work. 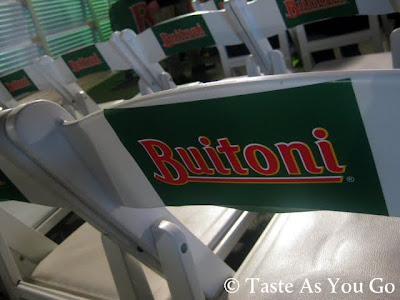 Once I exchanged my ticket for Saturday’s Grand Tasting for a purple wristband at the Illy Park Welcome Center and had chugged a sufficient amount of coffee, I took my place at the end of the queue of people waiting to gain access to the South Stage at Pier 57. 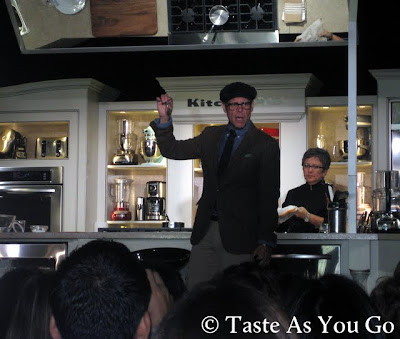 Like so many others, I was eager to secure a good seat for Alton Brown’s culinary demonstration. Luckily, I managed to find one a few rows from the front and was able to watch the demo with minimal obstruction. Good thing -- I didn’t want to miss one second of his tutorial on opening a bottle of wine with a power drill. 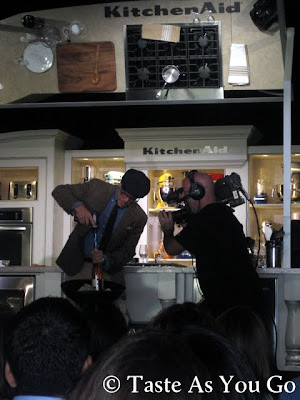 Fans of AB know that he’s not a fan of the “unitasker” (a kitchen gadget that serves only one purpose), and since a corkscrew generally falls under that category, he came up with a "better way" to open wine without a corkscrew. With the aid of the drill and a simple attachment obtained at the hardware store, AB demonstrated that owning a corkscrew is simply not necessary if you have the right tools in your garage (or wherever else you store your power tools).

While the first part of AB’s demonstration was extremely entertaining and equally as informative, I think it’s safe to say that watching him demonstrate the proper technique involved in sabering a bottle of champagne was the high point.

Minus his crack about the Red Sox, that is. 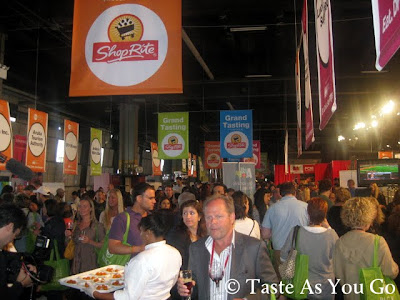 After AB’s demonstration wrapped, I made my way into the main space and was immediately flanked on either side by enthusiastic attendees eager to begin tasting and drinking their way from booth to booth. There were so many bodies pushing their way in each direction that it took me a solid fifteen minutes to push my own way to the extreme end of the room to the Buitoni booth to check in. 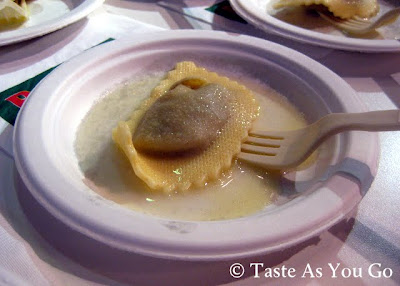 As I chowed down on the Wild Mushroom Agnolotti in a Light Butter Sauce (melted butter thinned with a bit of pasta water), I watched as a long line of people wanting to take their picture on the Buitoni Vespa formed. (Think photo booth with a Vespa as the prop.) Photos were printed a few minutes after they were taken so attendees could have physical keepsakes of the time they spent at the Buitoni booth. There are a couple of photos with me on the Vespa floating around out there, but, unfortunately, I couldn’t get my hands on digital copies.

Yes, I imagine that all of my readers have British accents.

Without further ado, here’s just a sampling of what I ate at the Grand Tasting. 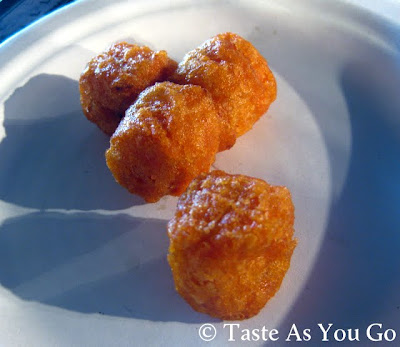 The crispy bite-sized sweet potato puffs from Alexia Foods reminded me of sweet potato tater tots. They’re perfect for snacking or for serving as a side dish in a meal inspired by fall flavors. I can even picture myself serving these with cinnamon sugar for a fun dessert. 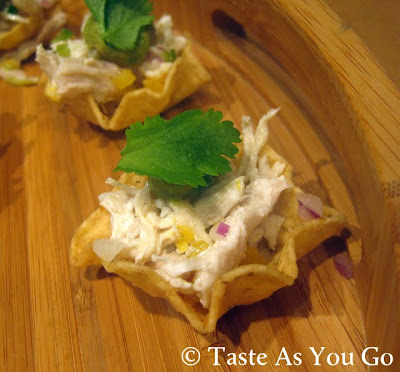 Over at the entwine booth, they were serving little bites of food paired with each of the wines they were pouring that afternoon. These Mini Chicken Mango Tostadas were appropriately paired with the Pinot Grigio, which brought out the natural sweetness of the mango. 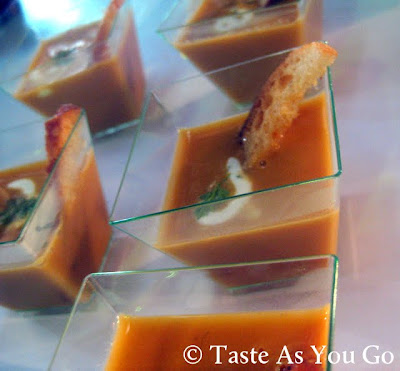 This creamy Shrimp Bisque actually had generous chunks of seafood at the bottom of the cup. Although it was rather warm inside the event due to the number of bodies confined to one space, it was cooler outside, and the bisque served as a cozy reminder that fall was certainly in full swing. 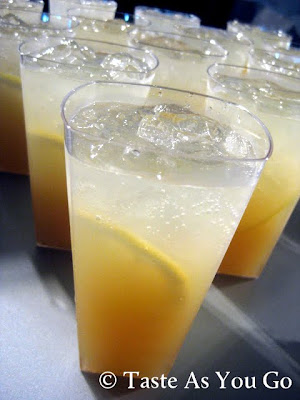 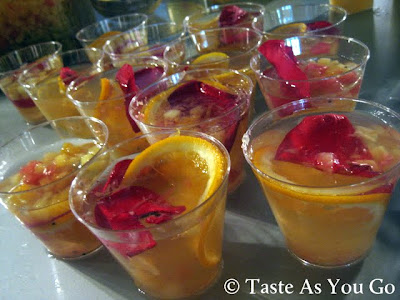 Since I concentrated solely on food for the first hour or so, I stopped by the Celebrity Cruises booth to try the Spiked Lemonade they were handing out. While they were also serving White Sangria, I limited myself to just one cocktail for the time being. But, because they were so beautifully garnished, I took a quick picture before continuing on my way. 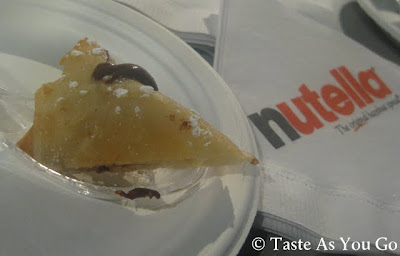 I tried a few more savory dishes before switching my focus over to dessert. Thankfully, there were plenty of options for me to choose from, including this Nutella & Caramelized Apple Spring Roll. A damn good idea, in my opinion, that wasn’t executed too well. While I appreciated the crispiness of the wonton wrapper, I was disappointed to discover that the apple on the inside was also crispy (i.e. raw). I would have preferred less bite to the fruit. And, unfortunately, the whole dessert was cold by the time it touched my lips, but I chalk that up to the reality of creating mass quantities of dessert at once. 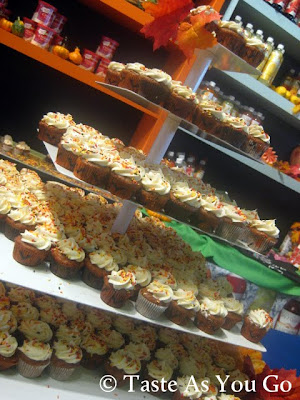 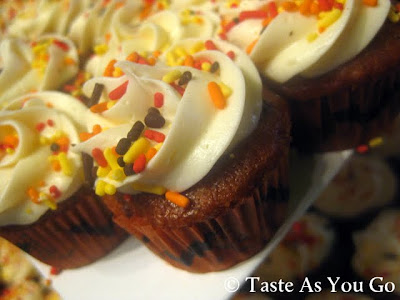 Not too far from the Nutella booth was a tower of Duncan Hines cupcakes decorated in honor of fall. And as tempted as I was to try one, I had my heart set on some cupcakes that I spotted earlier in the day. 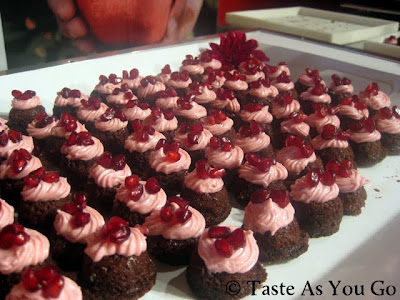 I’m sorry, but how gorgeous do these mini cupcakes look?

Created by Chef Ashley James of the Four Seasons, Beverly Hills, these POM Velvet Cupcakes with POM Cream Cheese Frosting contain POM Wonderful pomegranate juice in every single component, from the cake itself to the frosting to the decoration. And they were positively scrumptious.

And I don’t use that word very often. 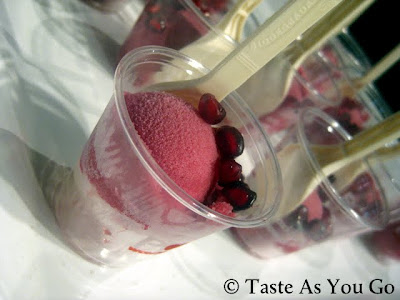 I was perfectly content with walking away from the POM Wonderful booth having sampled (and sampled… and sampled!) the cupcakes until I turned around and saw a young man standing there with a tray full of these cups of luscious POM Sorbetto, created by Chef Holly Smith, chef and owner of Café Jaunita in Seattle. Cool and tart, this dessert really highlighted the flavor characteristics of the pomegranate.

Is there no end to the ways you can use POM Wonderful pomegranate juice? (If you think the answer is yes, then you need to check out my recipe for Fiery Pomegranate Sauce. It’ll change your world.) 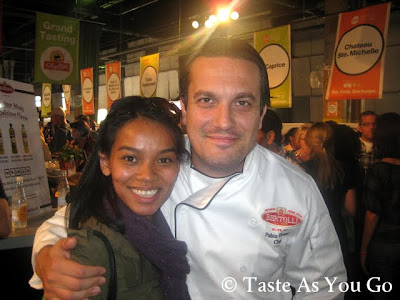 With Chef Fabio Viviani from Season 5 of Top Chef

As if attending the Grand Tasting wasn’t enough of an amazing opportunity, guess who I bumped into on my way out? Chef Fabio Viviani from Season 4 of Top Chef! He happily paused what he was doing to take a picture with me, and I happily accepted his compliments.

He called me “beautiful principessa”.

Thank you, Buitoni, for giving me the opportunity to attend the first Grand Tasting of the weekend. I can’t wait to share with everyone what I ate during the second one!