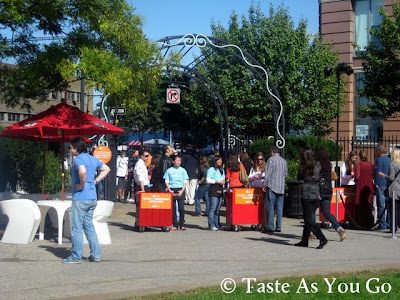 Buitoni provided me with the ticket to Saturday's Grand Tasting at the 2011 Food Network New York City Wine & Food Festival. I did not accept monetary compensation for this opportunity. All opinions expressed are my own.

I'm not going to lie. Given that I was on my seventh straight day of riding the bus into the city, I was absolutely exhausted by the time I got to the final day of the Food Network New York City Wine & Food Festival and Sunday's Grand Tasting. I was moving noticeably slower than my typical commuter pace as I walked from the subway station to the Illy Park Welcome Center, so I dialed it down and took a more relaxed approach. 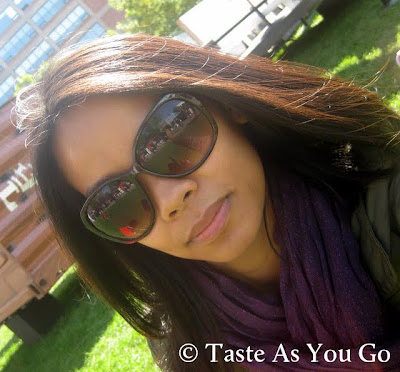 I had originally planned to get my wristband right away and get in line at Pier 57 for the day's first culinary demonstration. Instead, I lingered at the Welcome Center and got in a good dose of people-watching while sipping my cappuccino, an activity I don't have much time for these days.

While I was basking in the sun, a couple walked over to me and asked, "Are you somebody? You look like somebody. Will you take a picture with us?" I didn't have the heart to tell them I was just me and not "somebody", so I posed for a picture with them. It was the least I could do, right? 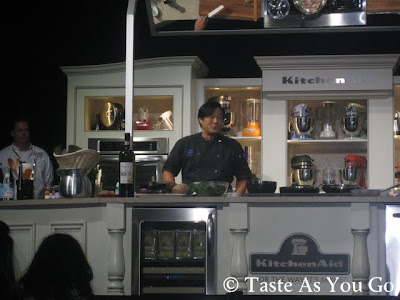 Since I saw Alton Brown on Saturday, I headed to the North Stage this time for the demonstration with Chef Ming Tsai. I grew up watching episode after episode of his PBS show Simply Ming, so I couldn't wait to finally watch him cook in person. He packed his demo full of cocktails, helpful culinary information, and advice:

"I like to eat at drive restaurants for inspiration. It's important to go out and eat other people's food to see how you can bring it home and make it your own."

After the demonstration was over, I hit the floor, determined to enjoy the afternoon and the food and not worry so much about taking photos. It took all of fifteen minutes for me to throw that plan out the window and reach into my handbag for my camera. 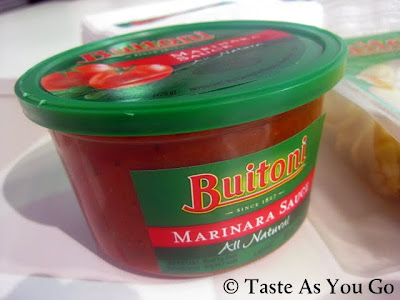 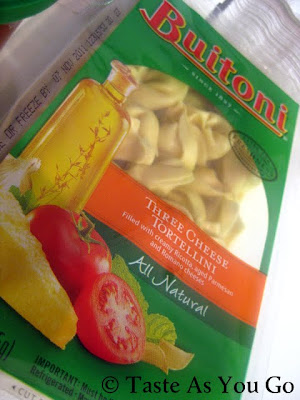 Naturally, I went all the way back to the Buitoni booth to see which pasta they were serving up. What I discovered made me very, very happy and instantly put a smile on my face. 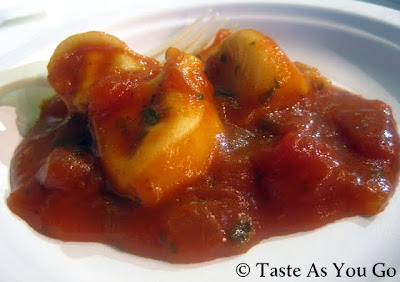 Three Cheese Tortellini with Marinara Sauce! I can't tell you how many times my mother made this very same meal for dinner. (When she wasn't force-feeding us tuna casserole, that is.) With each bite, I was transported further back in time, and despite the crowd of people swarming the booth, it felt as if my mother and I were sitting at the kitchen table, just the two of us.

It was a nice moment.

Before I got too teary-eyed, I told the Buitoni bunch I'd see them later and started to explore the other exhibits. Here are just some of the pictures I took: 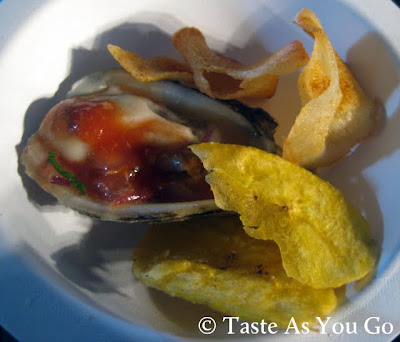 My love for raw oysters didn't develop until later in life, so I was thrilled when I came across the Oyster Ceviche from the Hudson River Cafe. I could have easily eaten a dozen of these. 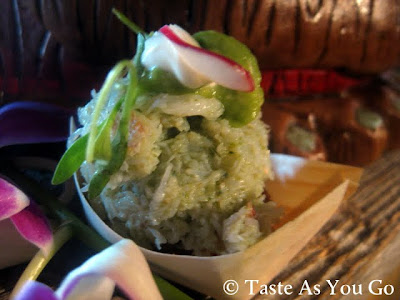 Crab and Avocado Corn Cake from The Hurricane Club

I could have also eaten a dozen of these Crab and Avocado Corn Cakes from The Hurricane Club. Look at all of that crab piled high on that corn cake, which isn't actually visible in this slightly blurry photo.

(Sorry, there were hungry old women all around me clamoring for food. It was sort of scary.) 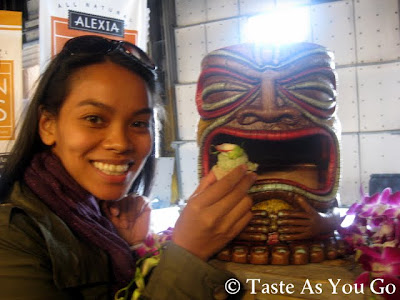 Sharing the Crab and Avocado Corn Cake
from The Hurricane Club

In the middle of the chaos (okay, I'm exaggerating a little), I managed to grab a corn cake for this little guy. He was getting hungry watching everyone else eat. See how he's holding his tummy? 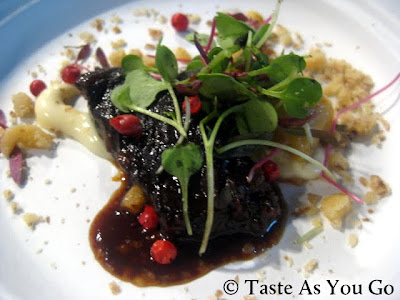 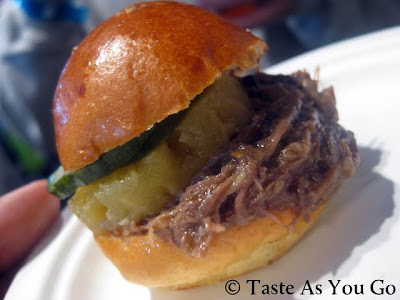 Thankfully, there was no shortage of braised short ribs at the festival that day. Cityhouse was serving up Thai Braised Short Rib Sliders with grilled pineapple and pickled cucumbers (why not just call them "pickles"?) on a brioche bun. Unfortunately, this dish didn't sit well with me either. Although the short ribs were sufficiently juicy, I would have preferred a thinner slice of grilled pineapple. The sweetness of the fruit overpowered everything else, and I could only manage a couple of small bites. 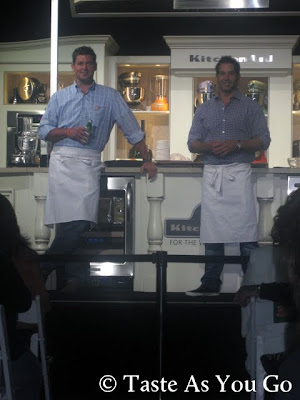 I didn't let a few not-for-me dishes ruin the afternoon, however. Even though I was running out of steam, I decided to stop by one more culinary demonstration before heading back to Pennsylvania. The Deen Brothers, Jamie Deen and Bobby Deen, were slated to appear on the North Stage, so I grabbed a seat and waited to find out what they were going to prepare. 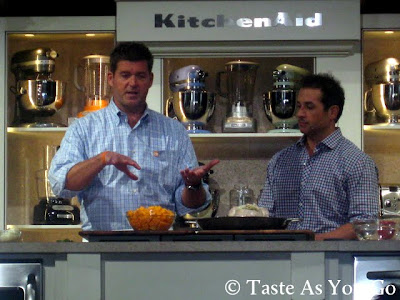 In between talking about what it was like to learn how to cook from their mother, butter-lovin' Paula Deen, they focused on the basics: how to roast a chicken. Something everyone should know, in my opinion. To be honest, it was a little difficult to concentrate on what they were saying. Something was distracting me. 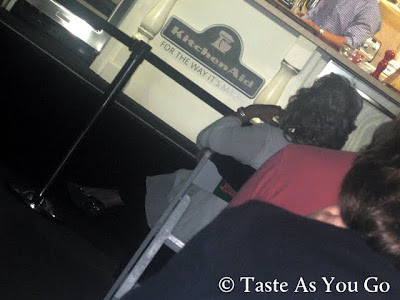 Or, should I say, someone was distracting me. In case you can't tell by looking at the back of her head... that's Paula Deen in the front row! She surprised everyone by making a special appearance so she could supervise the demonstration. It was such fun watching her interact with her boys in real life. You could tell that they really are a close-knit family.


Go on and check out this video I took of Jamie and Bobby answering some questions from the audience. Even Paula chimes in!

Thank you so much to Buitoni for giving me the opportunity to attend the NYC Wine & Food Festival. I had an amazing time! Hopefully, we'll work together again in the future!