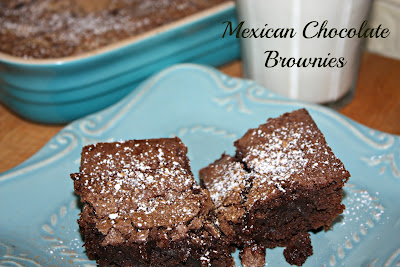 It's Wednesday, and Stephen and I are three days away from the wedding. Taking care of last-minute details remotely has been a little bit stressful for me, but my parents have been ROCK STARS in seeing to the finalization of certain items in the last 48 hours, including the delivery of reception goodies to our venue and the picking up of my wedding dress!

With so much going on, I'm unbelievably grateful for my guest bloggers this week. I hope you've had a chance to read Becca's post about Double Chocolate Almond Biscotti by now.

Today, I'm going to continue campaigning to those with a sweet tooth by turning Taste As You Go over to Aly Cleary from Cooking in Stilettos, who's going to share with you her spin on Mexican Chocolate Brownies. Aly is one of my favorite Twitter friends that I'm dying to hang out with in real life. I can just picture us eating our way around eastern Pennsylvania, pausing only to shop for shoes. A match made in heaven, if you ask me.

They're all yours, Aly!

When Michelle asked me to stop by Taste As You Go, I was honored. In addition to Taste As You Go being one of my favorite "must read daily" blogs, Michelle is just one of the sweetest people ever!

When it comes to cooking (and baking), I'm not only a taste-as-you-go type of gal, but a learn-as-I-go type, too! I often joke that, about 10 years ago, I couldn't cook my way out of a paper bag, and, quite frankly, the dishes that I could make successfully (i.e. without burning) were Velveeta Shells & Cheese, pasta with jarred sauce, Captain Morgan Chocolate Chip Cookies, and, perhaps, brownies out of a box. You know... The ones with the DH in the name.

The recipe I'm going to share with you today? I swear on my stilettos that they will be the best darn brownies you have ever had, full of chewy goodness. You might even donate all the brownie mixes in your pantry to a local food bank and vow to make them from scratch from now on. I'm serious... they are THAT good.

Now, I adore Mexican chocolate -- whether it's in a pudding, a hot chocolate (spiked with a bit of tequila), in cookies -- but, in all my baking attempts, I have to confess, I never attempted the brownie. When Michelle asked me to guest post, I decided there was no better time than the present. In doing my research for a decent recipe for a Mexican Chocolate Brownie, I often came across recipes that were from a box with a bit of spice added to the mix. That's not what I wanted to give Michelle -- I wanted a brownie recipe that did not have an ingredient list that warranted the need of a dictionary.

Thankfully, I knew Chef Aarón Sanchez would come to the rescue for this brownie craving. These brownies are so rich, you will close your eyes while eating them and savor every crumb. Heck, you might even fight over the batter bowl and refuse to share. The brownies are kicked up with the flavor of cinnamon and a slight dash of heat from cayenne and then dusted with more cinnamon and sugar.

Before you say, "I don't like spicy," let me tell you... I'm the biggest wuss about spicy food. I like mellow heat -- the heat that warms you just like a cozy sweater. I don't need the five-alarm-send-two-gallons-of-milk-stat kind of heat. This brownie has just a touch of warmth and, sometimes, less is more.

Give this recipe a try next time you're craving something deep, dark, and rich, and then tell everyone you made it from scratch. Let them marvel at your brilliance -- it'll be our little secret.