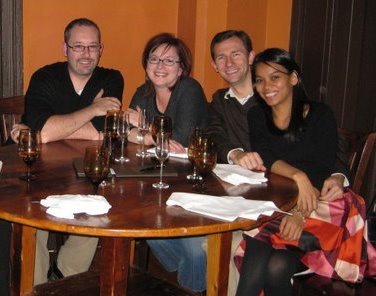 Regular readers of Taste As You Go are probably scratching their heads right now, trying to figure out where they've seen this picture before. I admit it. I'm reusing my own old material. This is a cropped version of the picture I used in my write-up of a dinner with friends at Osteria in Philadelphia. I'm using it is because I didn't think to have our server take a picture of the four of us - Rob, Pere, Stephen, and myself - during the dinner we had at Apollo Grill in Bethlehem, PA in early August. Since we all pretty much look the same, I figured it would be okay.


Dinner at Apollo Grill was not originally in my BlackBerry since the plan was to meet on a Thursday evening. However, that all changed when the company I was working for suddenly downsized and I was left with instructions on how to file for unemployment in New York and a wide-open schedule. Getting on a bus and getting out of the city was just what I needed to get over the initial shock of losing my job. And being around friends is always a good thing. Especially when they love to try new restaurants and dishes as much as I do! With that said, it was hard for us to decide which items to choose from the menu. To feed my bruised spirit, I decided to order an entree, while the remaining members of the dinner party decided to split an assortment of appetizers, which they kindly let me sample. (Such nice friends!) Selections included... 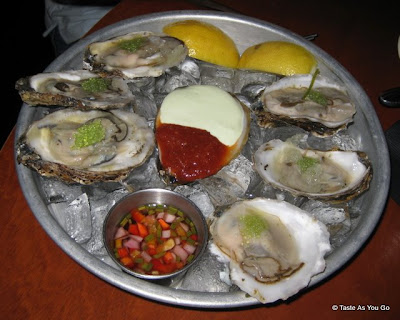 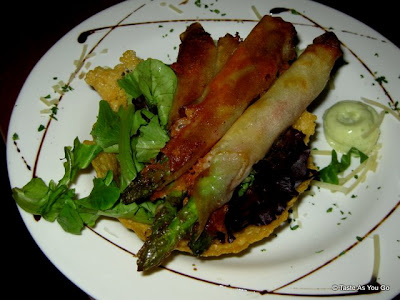 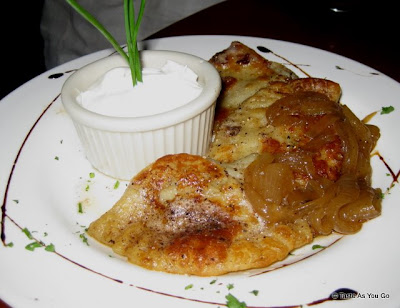 ... and Fresh Pierogis, served with caramelized onions. Of course, other dishes were ordered, including the Lobster Ravioli ($11.50), served with a sweet and spicy honey chipotle sauce; Thai Sesame-Encrusted Shrimp ($10.50), served with its own sweet and spicy sauce; and the Lump Crab & Avocado Cocktail ($14.50), sauteed in tequila lime butter. Unfortunately, the pictures we took of those items didn't survive (bad lighting, blurry...). All of the appetizers were delicious, and I was hoping my entree would be just as good. So, what did I choose? 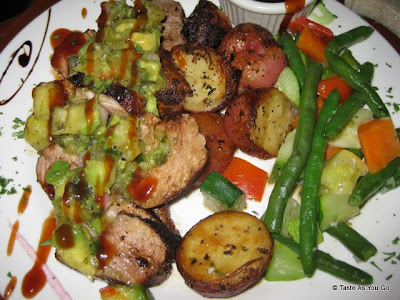 Even though the Sesame-Crusted Sea Scallops ($23.50) with a miso glaze, served with soy basmati rice, was calling my name really loudly, I opted for something I don't normally order. I chose the Caribbean Pork Loin ($23.50), prepared with a dry rub and served with Caribbean BBQ sauce, an avocado slaw, roasted potatoes, and steamed vegetables. Good choice, Michelle! The pork loin was tender and moist and had tremendous flavor from the dry rub. And, well, it didn't hurt that it was covered with the most delicious avocado slaw I've ever eaten. I'd definitely order that dish again! (Note: Another reason why I chose the pork loin over the sea scallops was because Stephen had guessed that that's what I had wanted to order before I said anything. I ordered the pork loin so he wouldn't be right!) 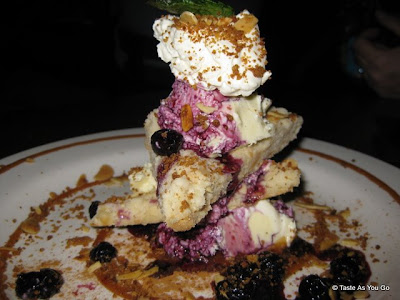 After all that food, you'd think we wouldn't have room for dessert. Of course, we did! The four of us shared the Mexican Chocolate Cake with Peanut Butter Mousse and Chocolate Ganache ($6.95) and the Blueberry Cheesecake Napoleon ($6.95), which consisted of Apollo Grill's Vanilla Bean Cheesecake, layered with Toasted Almond Shortbread and Blueberry Compote. I only took a little bite of the Blueberry Cheesecake Napoleon because I'm not the biggest fan of cooked blueberries (love them when they've been freshly picked, though). I thought the dessert would be awkward to eat because of how precarious it looked all stacked up like that on the plate, but it wasn't and the flavors just worked.

Now, the Mexican Chocolate Cake was, in my opinion, a masterpiece. I don't throw that word around a lot, but there really is no other word to describe it. The pairing of chocolate and peanut can often result in a dessert that is dense and rich, a dessert that can form immediate cavities in the teeth of a diner. However, this cake was rich but deceptively light. So light that finishing it off in one sitting was... well... (please forgive me)... a piece of cake. If you're ever in the Lehigh Valley, say, visiting the newly opened Sands Casino, which is just a bus ride away from Manhattan, then I highly recommend you try and squeeze in a meal at Apollo Grill.* It's definitely worth it!

*There is an endless list of things to do in the Lehigh Valley (see comments). I just mentioned the Sands Casino because of all of the billboards around Port Authority advertising it and Emeril's restaurant there. (edited 9/9/09)