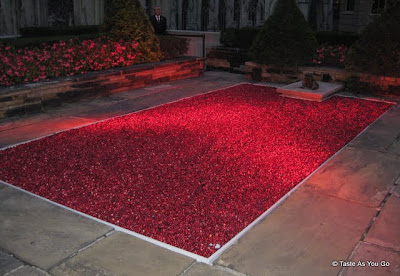 My invitation to Ocean Spray's "Bogs Across America" event at Rockefeller Center not only included the opportunity to meet and interview Duff Goldman from the Food Network's Ace of Cakes, but it also included the opportunity to attend the VIP Party later that evening, where Tyler Florence was scheduled to present the awards to the Grand Prize winners of the 2009 Ultimate Cranberry Recipe Contest. We all gathered at the Loft & Garden of Rockefeller Center, taking in the breathtaking view and sipping on drinks before heading in to taste samples of the finalists' recipes and to hear the announcement of the winners.


As I was heading out to the garden after I checked my coat, what should I hear but a woman's voice asking, "Are you Michelle from Taste As You Go?" When I answered in the affirmative, the woman replied, "I'm Megan! I just wrote a Guest Post for you!" What a crazy small world! Here's a picture of the lovely Megan with Lewis Thompson, one of the finalists in the Foodservice Category of the Recipe Contest and the creator of the Tropical Summer Sling. Of course, they're drinking the cocktail Lewis invented. Unfortunately, since I wasn't sure just how much cranberry juice was in it, I had to pass on trying the drink and settle for white wine instead. Such a sacrifice, I know. 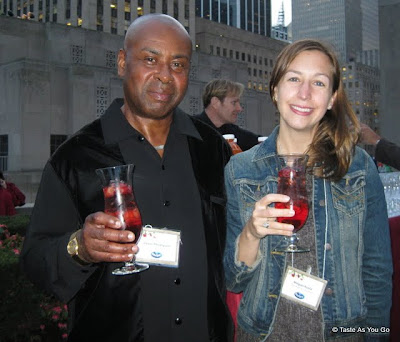 Once we all had the chance to grab something to drink, we were led inside for the tasting and the presentation of the cake and awards. 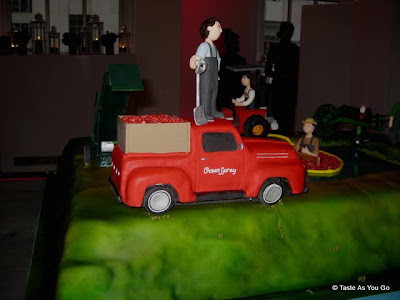 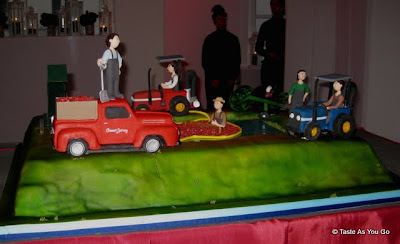 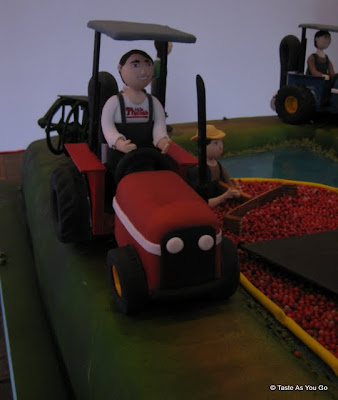 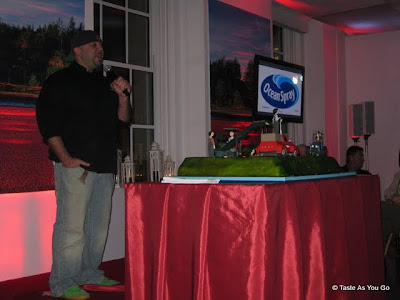 I loved being able to see the cake up close after watching Duff put the finishing touches on it while standing in the middle of the cranberry bog earlier that day. It was clear that a lot of time and effort and detail went into every aspect of the cake, including the clothes worn by the Ocean Spray growers being depicted. Although the lighting is poor in the third photo in the above group of photos, you can see that the man is wearing a Phillies shirt, something I thought my boyfriend (an avid Phillies fan) would appreciate. 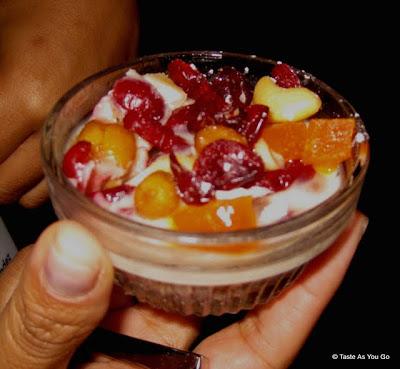 After the ceremonial first slice of cake was cut and the cake was wheeled back out of sight, Tyler kicked off the tasting by announcing the names of the recipes from the Foodservice Category. In addition to Lewis's Tropical Summer Sling, there was also the Trail Mix Tortoni from Bryan Buffington (pictured above), the Asian Shrimp and Scallops with Ginger Cranberry Syrup from Katsuto Sandifer, and the Cranberry Wontons with Cranberry Jalapeno Jelly Dipping Sauce from Chris Wright.

Because of my cranberry allergy, I only allowed myself the tiniest bite of the tortoni and only half of a scallop. Unfortunately, I missed out on the wontons. The dishes I tried were good, but I wasn't particularly blown away by either one of them. A bit of a letdown since these were recipes submitted by food industry professionals and my expectations were high. After hearing the announcement that Chris Wright's recipe had won the $25,000 prize, I was even sorrier that I wasn't more insistent about finding the server carrying the tray of wontons! 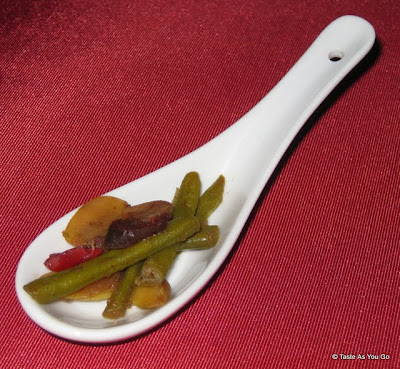 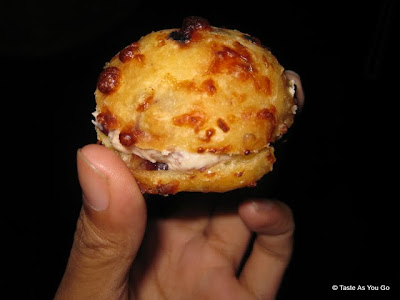 The recipes that were submitted in the Home Cook Category were so much more impressive! I tasted all four submissions: the Sweet-n-Savory Haricot Verts from Kara Adanalian; the Savory Blue Cranberry Shortbread with Caramelized Onion Cranberry Jam from Laureen Pittman; the Cranberry Bacon Brunch Scones with Cranberry Pecan Cream Cheese from Patrice Hurd; and the Cranberried Monte Cristo Strata from Janice Elder. The shortbread was so delicious and so unique and I just couldn't get enough of the scones filled with the cream cheese, which turned out to be the winning recipe in the Home Cook Category. Thankfully, my fellow food bloggers were watching out for me and took the food out of my hands when they thought I had subjected myself to too much. They didn't want to have to go with me to the hospital if I had a bad allergic reaction! Including the piece of Duff Goldman's cake that I managed to snag. It was full of cranberries, so I can understand their concern. I'm so loved! ;-) 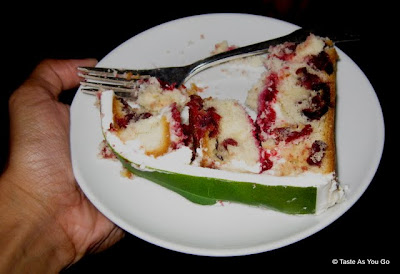 After the awards were presented, I milled around for a little while and got to watch as Duff signed a copy of his new book Ace of Cakes: Inside the World of Charm City Cakes, which was released on October 20, for Tyler. 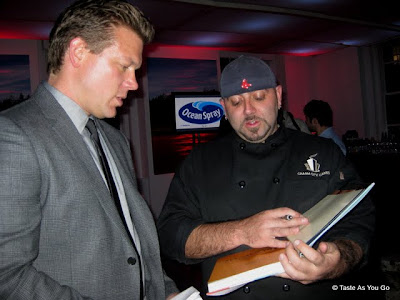 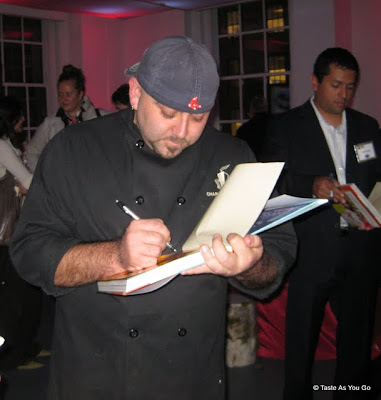 That was as close to Tyler as I could get. He was so busy being the emcee of the night that he didn't have too much time to take photos with adoring fans like me. But, that's okay.

I had a chance to talk to Duff some more, "off the record," and we chatted about the Red Sox (note the hat Duff is wearing in the above photo) and about the lack of sports teams in Connecticut. He seemed impressed to learn that I was, at one point in my life, a fan of the Hartford Whalers. That is until the team moved to North Carolina and became the Carolina Hurricanes. Now, hockey is a dead to me. 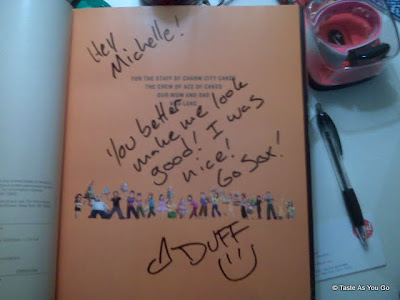 By far, the best part of my whole evening, aside from meeting Megan and trying food I shouldn't have and being within arm's length of Tyler Florence, was getting Duff to sign my copy of his book. Thanks, Ocean Spray, for another fantastic event!

PS. I think I made Duff look good.