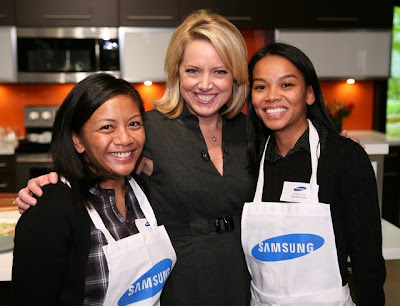 Despite the 60-degree temperatures in New York today, the holiday season is in full swing. They lit the Christmas tree in Rockefeller Center last night and the Christmas station is my station of choice on Pandora. Over the next few days, I'll put out my small stock of Christmas decorations and continue the countdown to Connecticut, where my boyfriend and I will spend the holiday with my family. While I haven't started my Christmas shopping yet, I have been trying to choose the perfect gifts to get my loved ones -- gifts that are meaningful but won't break the bank. It then occurred to me that I hadn't yet written about the Samsung "Skill-It" Event hosted by Food Network's Melissa d'Arabian that I attended back in November. This was the event that sent me home with the biggest swag bag I've ever received, trumping the gift bag I received at the Scharffen Berger event I attended in October.


Then again, I knew from the very beginning that this event was going to be a bit different. Especially since the PR agency was sending a car service to pick me up! (The car service also drove me home afterward.) Now, don't get the wrong idea. I have absolutely no problem with taking the subway in New York... but when you have the opportunity to get car service, you take it! Anyway, we pulled up to Shop Studios to find that they had laid out the red carpet for the event attendees. I felt so important!


After meeting my friend Grace outside (we've attended a couple of food events together recently), we were led inside and taken up to the event space in an elevator lined with blue carpeting and decorated with votive candle chandeliers. Classy! We picked up our nametags, checked our coats, and proceeded over to the bar for something to drink. (It was the middle of the afternoon, folks, so we just grabbed water.)


Before Melissa's cooking demonstration on the Samsung Induction Range began, Grace and I had time to nibble on the hors d'oeuvres being passed around and to look at the Samsung home appliances on display, including their dishwasher with a six-layer insulation system, several models of refrigerators, and a set of their washers and dryers. I couldn't help but dream of having some of those appliances in my home some day!


Melissa's presentation was so energetic and enthusiastic that I began to wonder just how much caffeine she had that morning. You could tell that she truly believed in the convenience of the Samsung Induction Range. Especially when she explained how reliable it was in terms of maintaining temperature and how safe it was in terms of shutting itself off after a certain period of time if you've forgotten to do so once you've removed a pan from the surface or if you have curious little hands and fingers playing nearby (i.e. curious children, not random body parts moving around by themselves in the kitchen).

The first dish Melissa made was her Orzo with Chanterelles. Sounds fancy, but it looked really simple to prepare. Melissa mentioned that this was a meal she made often at home for her husband and her daughters, varying the ingredients based on the vegetables she happened to have on hand in the refrigerator. This would be a fantastic dish to tweak if you're looking for a way to use up leftovers.

The other dish Melissa made for us was her Chocolate Espresso Pot du Crème, a sinfully rich and thick dessert that you'd expect to see as the extravagant finish to an expensive meal out in the city. To emphasize the fact that espresso was a component of the dish, Melissa served the dessert in small espresso cups. That was fine by us -- the handles on the cups made it easier to bring the chocolate closer to our mouths! To demonstrate just how thick the Pot du Crème was...


... I counted to see how long I could hold the dessert cup up by the spoon I had inserted into the it. I got to ten before gravity won. And, um, the dessert was so rich that I could only finish half of it. *gasp* But, not to worry, I used my time wisely by snapping some pictures with Grace and Melissa and by chatting with the two of them after the rest of the guests had started packing up their things to leave. I loved how ebullient Melissa is and how infectious her energy was! She told us what it felt like to be named the Season 5 winner of The Next Food Network Star and about her experiences with taping her television show, Ten Dollar Dinners, the second season of which premieres in January 2010. Such a real, down-to-earth woman who has figured out how to balance having a family and having a career all at the same time. (Hint: She prepares meals for her family, complete with instructions on how to assemble or heat, before she leaves town for work!)

Such a fun afternoon. Oh... I bet you're wondering what the heck was in that swag bag that was pictured earlier...


Two Samsung aprons (I got to take the one home that I'm wearing in the first picture), recipe cards, information about the Samsung home appliances, and a Samsung oven mitt.

But what was in that little box wrapped in blue paper? Based on the tag, I thought I scored a DVD copy of the first season of Ten Dollar Dinners. But I was wrong.


It was Cook Or Be Cooked, the first video game from Food Network! Now I have a good reason to buy a Wii (or ask for one for Christmas). After opening the video game, I just had one more box to take care of -- the big one wrapped in mysterious white paper.


Holy cow! I got cookware! This pan is going to come in MAJOR handy in my kitchen. Such an amazing swag bag. Speechless. You know... despite the fact that I'm still unemployed after nearly four months, life is still pretty damn good.