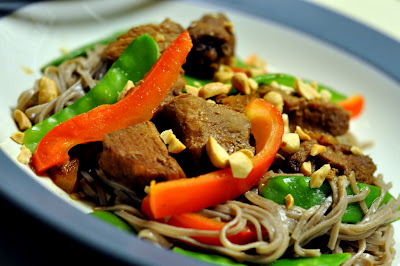 When I came home from my morning spent working remotely at our local Panera (I needed a change of scenery), I decided to spend the rest of the afternoon working from the comfort of my favorite armchair. Problem is, now that I'm here, I'm fighting a sudden temptation to take a little catnap before dinner. To stay on track, I've turned to the task of sharing a new recipe with you.


You long-term readers might be surprised to discover that this new recipe, adapted from a Real Simple recipe I pinned onto Pinterest a while back, involves pork. For those of you who don't know, pork isn't exactly my favorite protein out there. But Stephen likes it, so I add it into the dinner rotation every now and then to keep him happy. 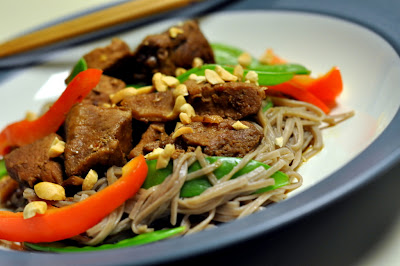 Turns out, it was pretty darn tasty. I loved the crispness of the bell peppers and snow peas, and the heartiness of the soba noodles meant that a little went a long way. (In other words, we were living off of the leftovers for a few days.)

My version includes the following changes:

The next time I make this dish, I'll probably cut the recipe in half so we're not stuck with more leftovers than the two of us can handle. Or, I'll freeze the pork with the sauce to defrost at a later point in time to serve with freshly cooked noodles and vegetables. Either way, we'll definitely be having it again.