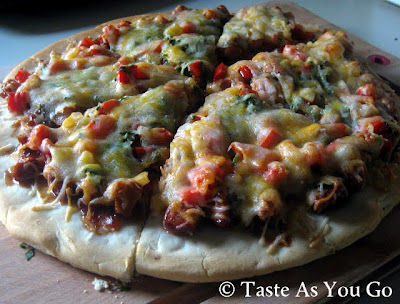 
It's been three years since my Barbecue Chicken Pizza first appeared on Taste As You Go. That was back when I was still establishing myself as a food blogger. Back when I was taking digital photographs with a camera that required four AA batteries. 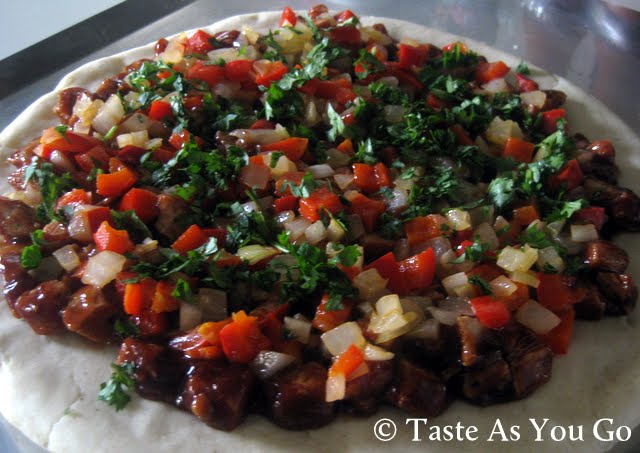 I made some changes to the recipe to shorten the cooking time. I realize that you may not have an hour to spare to prepare the chicken in the oven. This updated version of my Barbecue Chicken Pizza requires a fraction of the cooking time, which means you'll be able to get dinner on the table much faster. 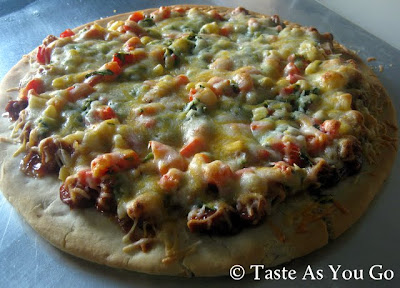 What's great about this recipe -- or any pizza recipe, for that matter -- is its versatility. I tend to use spicy barbecue sauce because I like things spicy, but feel free to use your favorite sauce, whether homemade or from a bottle. My original Barbecue Chicken Pizza recipe called for green bell peppers and red onions, while this version calls for red bell peppers and white onions.

If you'd prefer to use the traditional mozzarella cheese instead of the Mexican blend, then go for it! Just remember to use the ingredients you like and leave off the ones you don't. 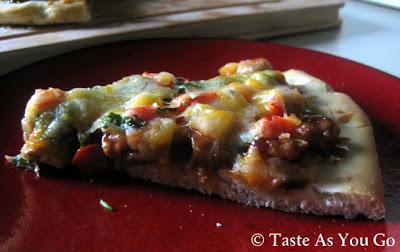 Barbecue Chicken Pizza
Whichever combination of sauce and vegetables and cheese you use, you'll ultimately wind up with a tasty pizza that would be great any night of the week.

I hope you enjoy it!