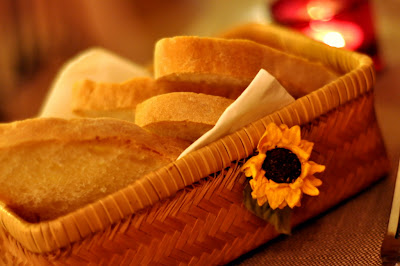 This is the third post in my Taste of Tuscany series.

I started writing this post while I was sitting in the lounge at the dealership waiting for a service tech to take a look at my car. Since I didn't know how long it would take to determine the reason for the engine overheating, I figured I'd put the time (and the free Wi-Fi) to good use. Everything was coming together nicely up until the moment I was told what was wrong (head gasket leak) and how much it would cost to fix it ($1100).

Needless to say, I lost my motivation and had to put finishing the latest installment of my Taste of Tuscany series on hold until I could put myself back into a creative space.


Forcing myself to think about the time Stephen and I spent in Tuscany while on our honeymoon wound up being a great way to keep me from panicking about the car situation. This post, in particular, recaps our favorite meal of the trip.

We had spent the entire day lazing about our villa, drinking wine, reading, and just enjoying the freedom to do nothing. Before we knew it, it was late and we had to go find dinner. Upon recommendation of our beloved hostess Elena Nappa, we drove to the tiny village of Lecchi to see if we could get a table at Ristorante Malborghetto. 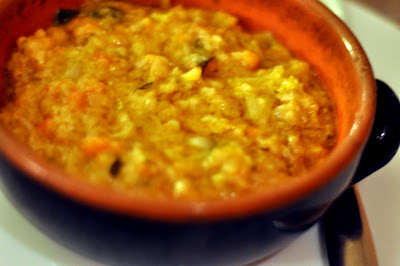 As luck would have it, there was a festival being held in the center of town, offering patrons a selection of grilled meats as well as live music, so there were plenty of tables in the restaurant. We were tempted to join the crowd outside, especially since the aroma of the grilling meat was amazing, but we stuck to our plan and went inside to have an intimate dinner, just the two of us.

In honor of our honeymoon, we splurged at Malborghetto and ordered every course. For my Antipasti Course, I chose the Ribollita, a traditional Tuscan soup made with leftover bread, cannellini beans, and vegetables. Such an incredible depth of flavor from such simple, unassuming ingredients. The bowlful was generous and the soup was filling, so I restrained myself and only ate about half of it. I had to save room for the next course! 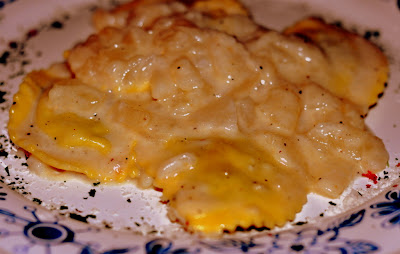 For my Primi Course, I ordered the Ravioli con Fonduta di Pecorino e Pera (Ravioli with Pecorino and Pears). Pecorino is widely produced throughout Tuscany, and I learned that aged varieties of the cheese are often paired with pear and other fruit to create a juxtaposition between savory and sweet.

I was expecting the filling to feature the two star ingredients; however, they, instead, appeared in the sauce for the ravioli. The sauce was mild, not as pungent as I anticipated, and the pears were diced and cooked in the sauce to provide a bit of texture. I wanted to be blown away by the combination, but I couldn't detect the sweetness of the fruit and thought it was overshadowed by the flavor of the Pecorino.

Would I order it again? I'm not sure. 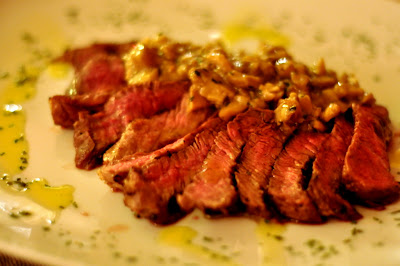 Two courses and several glasses of red wine later... We arrived at the Secondi Course -- The Meat. While Stephen ordered the lamb with spinach, I opted for the Tagliata Toscana di Filetto con Funghi Porcini (Tuscan Beef Tenderloin with Chopped Porcini Mushrooms).

Can you tell that I tried to stick to regional specialties?

In a word, this dish was luscious. Again, simple ingredients prepared in a way that highlights their natural flavor. The meatiness of the mushrooms, which were first sauteed in butter to bring out their nuttiness, elevated the tenderloin, which practically melted away in my mouth. 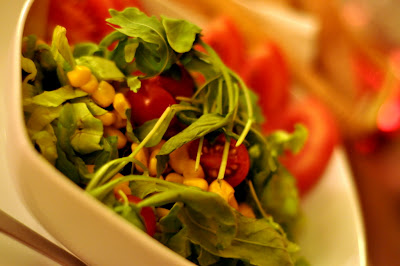 Right around the time I was starting to feel full and completely regretful that we still had more food coming (like the Insalata Mista), we were treated with a visit from Simon, Malborghetto's manager and sommelier. He wanted to talk to the Americans who weren't gulping down their food and rushing out the door... He wanted to get to know the couple that was lingering over their meal, taking their time to enjoy every bite. 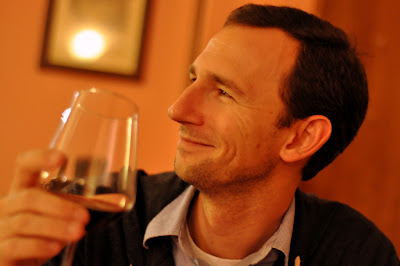 It occurred to us then just how long we had been at the restaurant. We didn't even notice the other table of people leave or that the kitchen staff had started setting up a table in the dining room so they could eat dinner. All of a sudden, Stephen and I felt like we, perhaps, stayed too long and our presence was preventing them from continuing on with their evening.

We asked Simon for our bill and promised that we'd get out of their way as quickly as possible so they could eat in peace. But Simon waved us off and told us to stay, to drink more, and to order dessert. 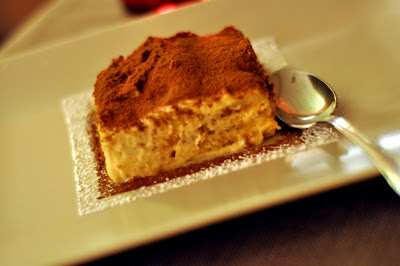 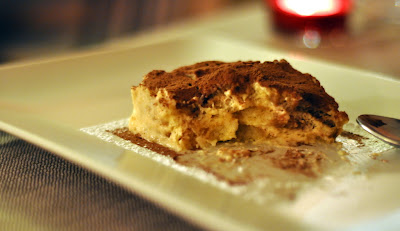 When Simon says to order dessert, you do it. And, thank goodness we did. Had we actually managed to leave before dessert, then we would have missed out on the best damn tiramisu I've ever had. 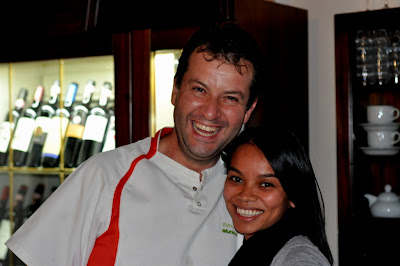 To Simon -- thank you for feeding the newlyweds an unbelievable meal and for encouraging them to stay just a little longer. 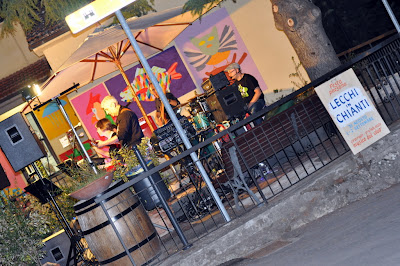 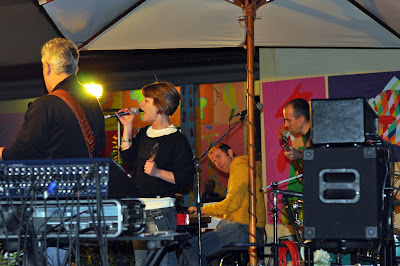 To the band playing outside -- thank you for providing the perfect soundtrack to our meal: