This quaint little restaurant in Bethlehem, Pennsylvania shows you that you don't have to leave the Lehigh Valley to taste the delicious flavors of the Mediterranean or to experience authentic Turkish cuisine. 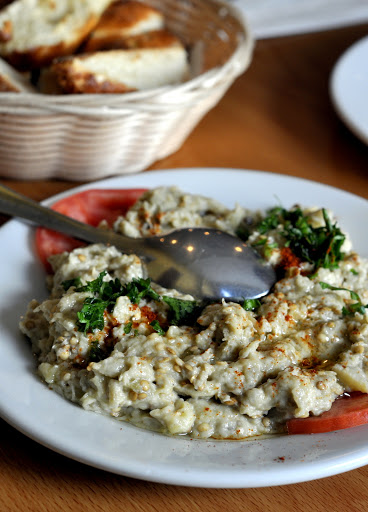 So much has changed since I published the very first restaurant review on Taste As You Go nearly seven years ago. Initially, I wrote about my dining adventures as my friends and I ate our way around New York City. As I got more comfortable with blogging, I started to write about the restaurants I discovered while traveling.

After Stephen and I got engaged, I relocated to Pennsylvania, and my reviews featured fewer restaurants in Manhattan and more restaurants in the Lehigh Valley. Now that we have a baby, things have, naturally, shifted again.

We haven't completely given up on the notion of dining out -- heck, we broke out of the house for brunch at one of our favorite local spots when Caroline was only two weeks old -- but we have changed our strategy when it comes to picking a place to eat.

Of course, this is going to affect the types of restaurant reviews I write. Eventually, you'll start to see fewer reviews about restaurants perfect for Date Night and more reviews about establishments that can reasonably accommodate families with babies and/or small children.

Falling into the latter category is Anatolian Kitchen in Bethlehem, a small and simply decorated restaurant in the Taylor Court Plaza on Linden Street. Stephen and I became slightly obsessed with their food when I was in my third trimester, so it seemed only right that we head there for a meal as soon as we could after Caroline was born. 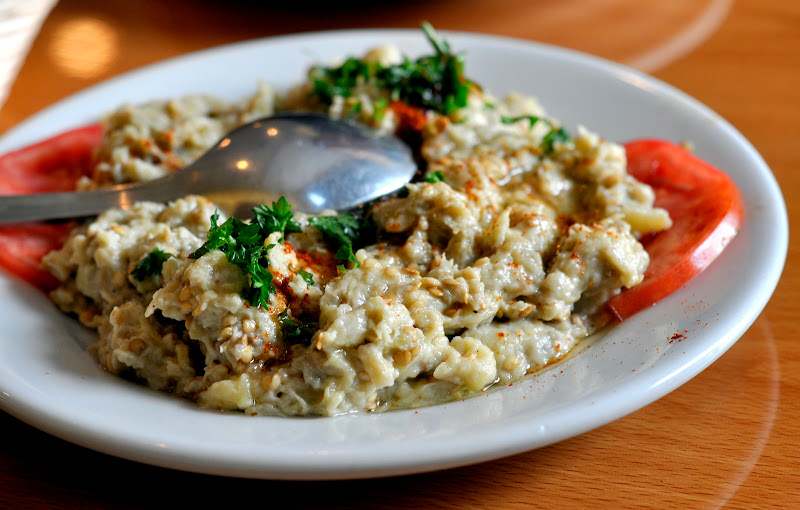 When the three of us walked into the restaurant, we were greeted warmly and given our choice of tables since the dinner rush hadn't quite started yet. After getting settled a table by the window (so Caroline could look outside if she started to get fussy), we quickly looked over the menu to finalize our order.

As a nursing mother, I'm hungry all. the. time. so I decided to order an appetizer to pick on while we waited for our entrees. Even though my brain was telling me to order a salad (we love their Shepherd Salad), I went with the Baba Ganoush ($4.95) instead, and, let me tell you, it did not disappoint! The char-grilled eggplant had a deep smoky flavor that was accentuated by just the right amount of garlic, sesame paste, and fresh lemon juice, and the added olive oil created a hearty dip perfect for scooping up with warm wedges of pita bread.

I could have eaten three plates of the Baba Ganoush, but, thankfully, our main dishes arrived before I could order another round of it. 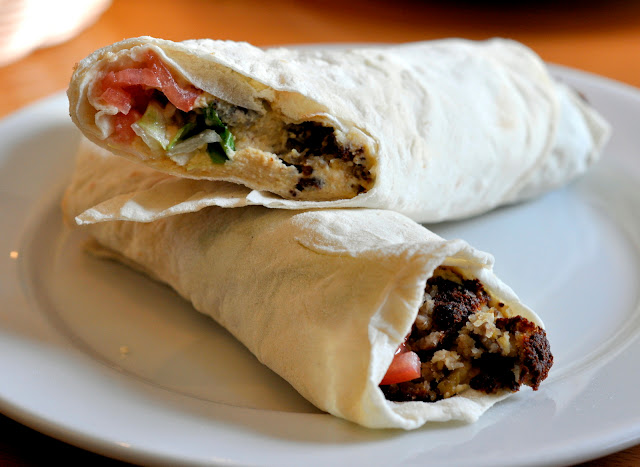 Because I was such a huge fan of them when I was pregnant, I ordered a Falafel Sandwich ($6.45) as my entree. Typically, I go with pita, but since I knew I was going to eat an entire basket of pita with my Baba Ganoush, I asked them to make the sandwich with their lavash flat bread.

I also requested hummus rather than tahini sauce and had them hold the onions. (I discovered the hard way that eating onions means a gassy baby, so I'll only eat them if they'e been cooked.) So, so good... and the falafel is some of the best I've eaten in the Lehigh Valley. 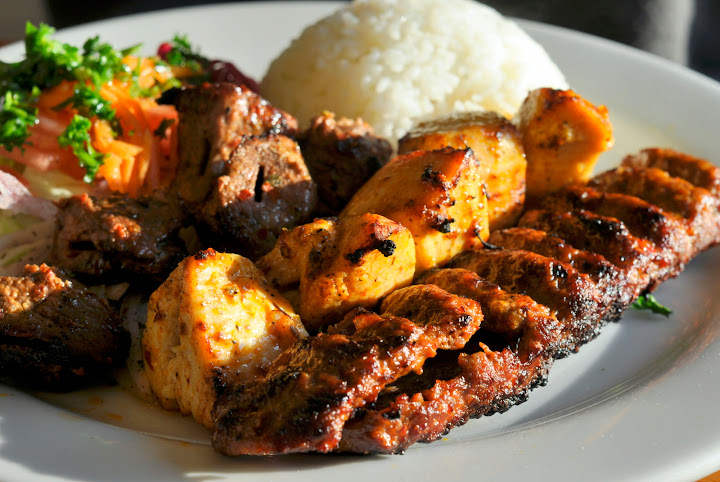 Stephen had planned on ordering a Falafel Sandwich, too, but the temptation to order the Mix Grill ($16.95) was just too great.

The platter offers a combination of their authentic Turkish shish kebabs -- chicken, lamb cubes, and ground lamb -- as well as a mound of rice and lettuce, onions, and fresh tomatoes on the side. The meat is marinated in a mixture of spices and their signature sauce before being threaded onto skewered and grilled over charcoal.

It's the marinade that keeps the meat juicy and flavorful and the grilling that chars the edges, leaving the meat crispy and caramelized in spots. I really loved the chicken kebab, but Stephen favored the lamb.

Although we didn't order dessert at this particular meal, we've had the Baklava ($3.95) and the Firin Sutlac ($4.95), a baked rice pudding, before and highly recommend both. Actually, we recommend getting a double order of both... because you're not going to want to share it with anyone once you have a bite.

Anatolian Kitchen does offer a Kids Menu that includes American cuisine (hamburger or chicken fillet) and Turkish cuisine (Turkish meatballs, gyro, or Turkish meat wrap). All items on the Kids Menu cost less than $8 and come with French fries and a small soda.