How a Box of Waffles Saved Me

Too busy to eat a breakfast? Not anymore thanks to Brian and Andrea Polizzi of Waffatopia! 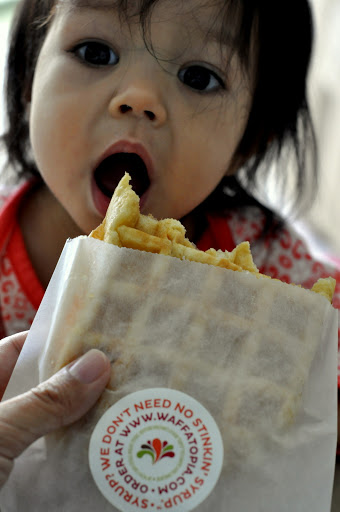 I was provided the opportunity to try Waffatopia waffles at no cost to me. I did not accept monetary compensation for this post. All opinions expressed in this post are my own.

I've tried to write this post several times now. Each of those attempts ended in defeat. The words weren't coming to me and the harder I tried, the more frustrated I got.

As someone who writes for a living, I couldn't figure out what the problem was. Then it hit me harder than the cold I've been battling for the past week. I knew the answer -- I'm exhausted.

My life has been all go-go-go lately. Despite my cold, I've been pushing myself harder than I have in a long time. Why? Because I needed to make the sale. To sign the new client. To chase after our toddler who's growing more and more mischievous each day.

I haven't given myself the chance to rest. I've been so consumed with being Everything for Everyone that I've been ignoring my own needs. (Raise your hand if you've been there before!) Thank goodness I realized what was happening before things got out of hand.

Since life should be about celebrating the little things, I will say this -- I am beyond grateful for my recent night out with the girls, a box of caramelized waffles, and a bottle of cherry-flavored NyQuil. They all played a part in saving me. 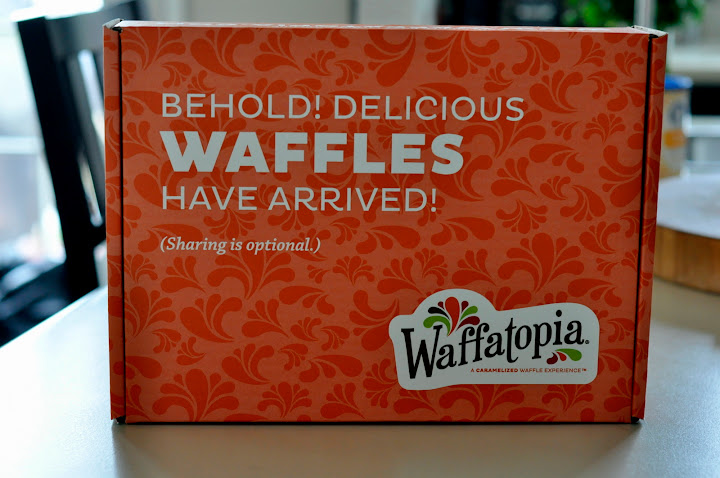 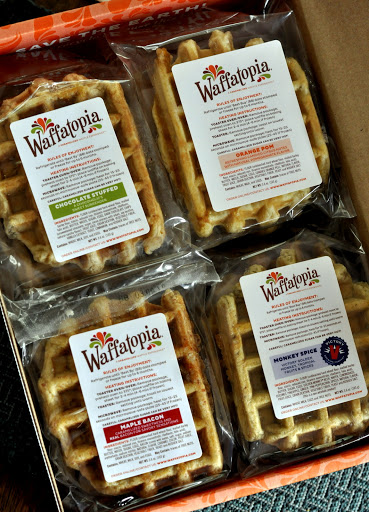 Now, don't go worrying that I've taken too much NyQuil. You read it right. I did say that a box of waffles saved me. A box of Waffatopia waffles, to be specific.

I first met Waffatopia founders Brian and Andrea Polizzi at a food blogger event back in November. And that's when I got to taste their unique take on traditional Liege waffles. They had me hooked after just one bite! But I didn't appreciate how truly special Waffatopia waffles were until recently. 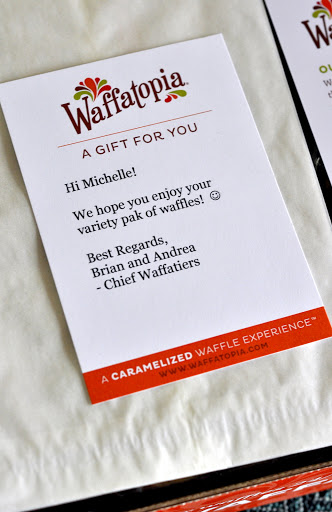 After connecting on Instagram, Brian offered to send me one of their Variety Paks to try. He said their waffles are perfect for new moms because they arrive fully cooked (just reheat in the oven or microwave) and only require one hand to eat.

How could I say no to that?

When the shipment arrived, I opened the box and found four different flavors inside: 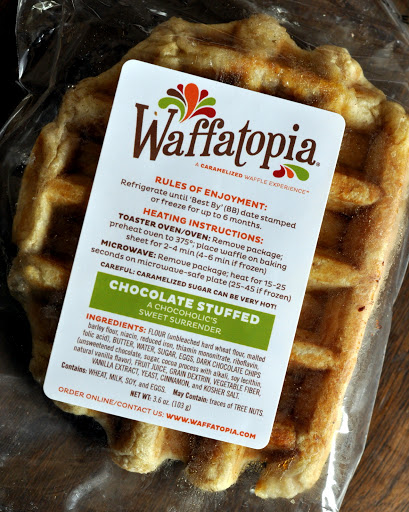 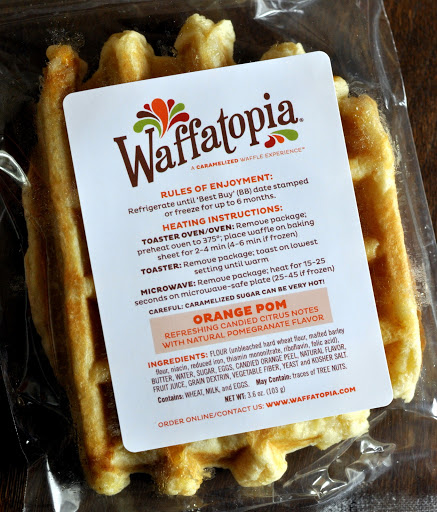 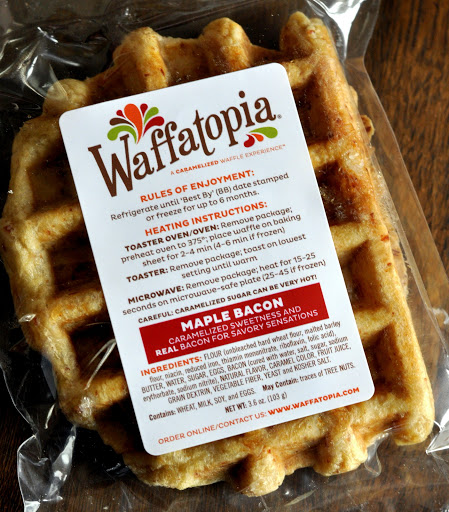 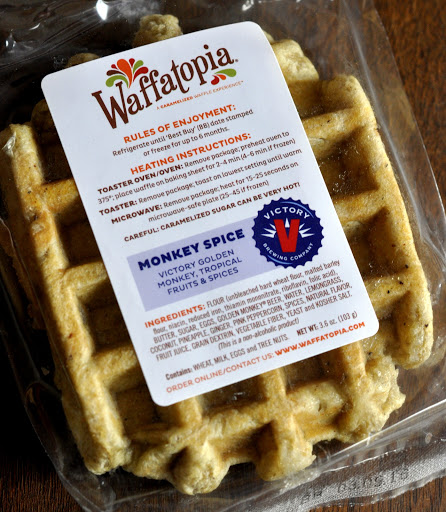 It didn't take long for Stephen and me to decide which two flavors we wanted to try first. 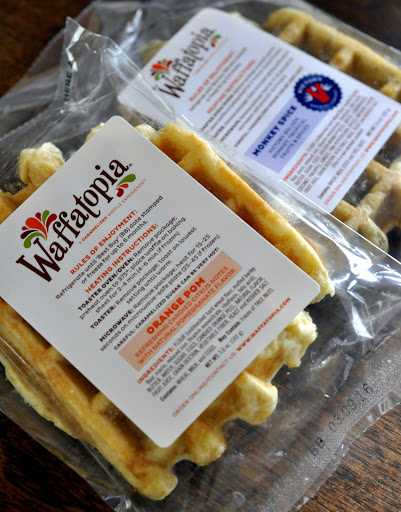 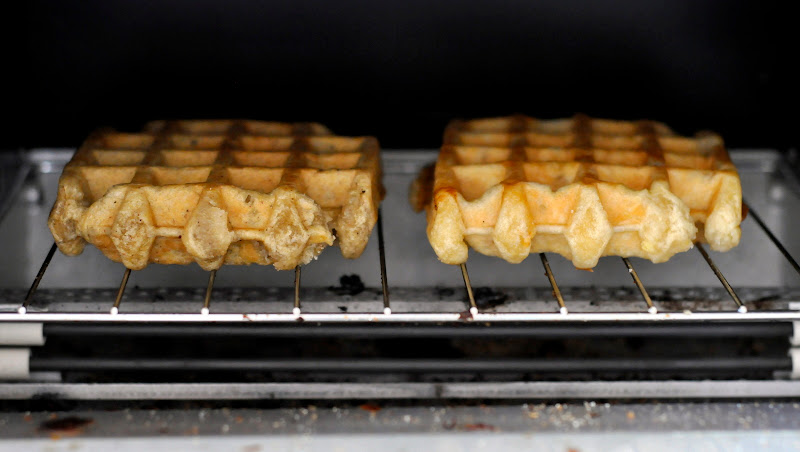 Following the heating instructions printed right on the packaging, we popped the waffles into the toaster oven to reheat them. A few minutes later -- literally, three minutes later -- they were ready! 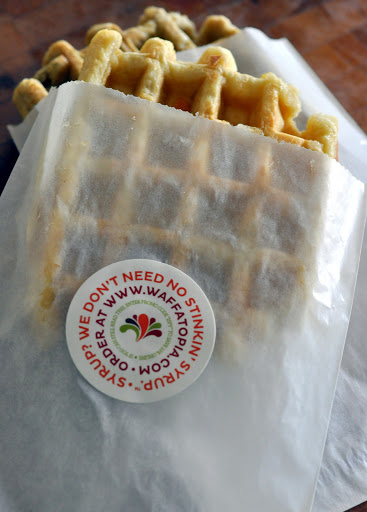 To serve, all I had to do was slide the waffles into the waxed sleeves provided in the box, and we were free to go about our morning. 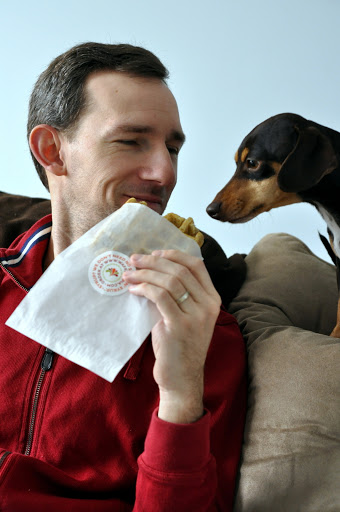 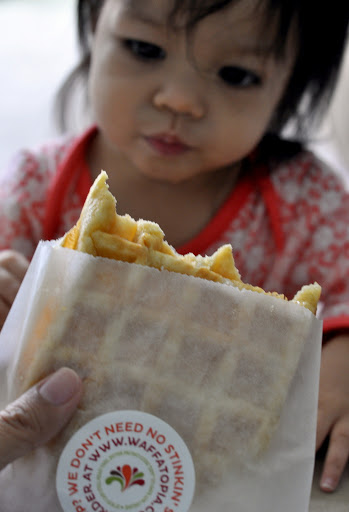 Of course, the smell of something sweet in the air had all of the kids wondering what Daddy and Mama were up to. 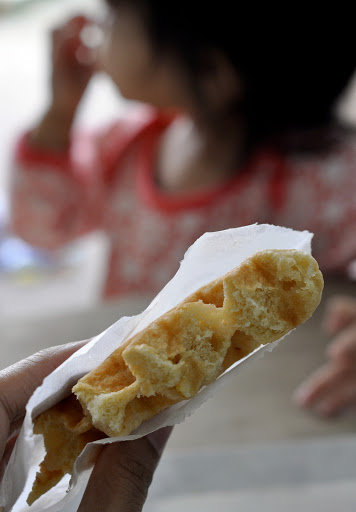 I thought the Orange Pom Waffle was absolutely delicious and unlike anything I've ever eaten before. The yeast-risen dough gives the final product a wonderful bread-like texture that's denser than the batter-poured Belgian waffles we're used to, and the caramelized Belgian pearl sugar that's baked right in provides a satisfyingly sweet crunch.

And the combination of orange and pomegranate? Heavenly.

The slight tartness from the pomegranate enhances and brightens the citrus notes from the candied orange peel in the dough, while the pearl sugar balances everything out. 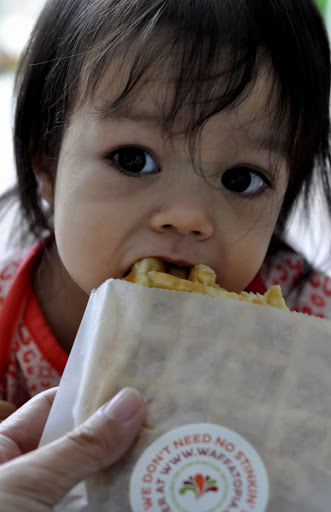 I loved it. And so did Caroline!

As for the Monkey Spice Waffle, Stephen really enjoyed it. The herbal fruitiness of the beer brought out the banana and lemongrass in the waffle and created and unexpectedly perfect pairing. Had we not just made coffee, I'm sure he would've eaten the waffle while sipping on a Golden Monkey! 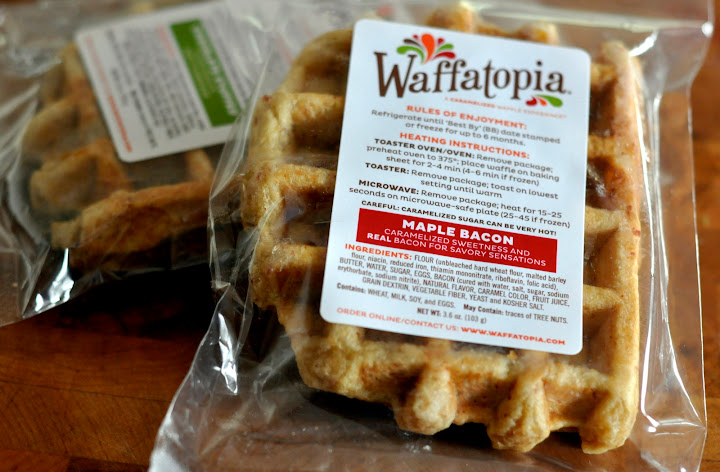 We probably should've stopped there since Waffatopia waffles are filling, but curiosity got the better of us. We went back into the kitchen and heated up two more waffles -- one Maple Bacon Waffle (for him) and one Chocolate Stuffed Waffle (for me).

Two more winners! It's hard to go wrong with a classic savory-and-sweet pairing like maple syrup and bacon, and who doesn't love chocolate with their waffles every now and then?

Stephen and I both benefited from having a stash of Waffatopia waffles in the freezer. He was able to enjoy a sweet treat after dinner, while I was able to eat a breakfast having nothing to do with cereal that had been spilled all over the floor. Plus, the variety of gourmet flavors made it feel like we were spoiling ourselves. :)

Thanks, Brian and Andrea!

Want to try Waffatopia waffles for yourself (or give them as a gift)?


Order Waffatopia waffles online and get FREE SHIPPING through the end of March by using the promo code "tasteasyougo" at checkout! Enjoy!

One year ago: Not Exactly According to Plan {The First Week of Motherhood}
Two years ago: Mitzi's Table - Bethlehem, PA
Three years ago: Top of the Bay - Warwick, RI
Four years ago: On the Side: Special People, Special Gifts
Five years ago: Subpar Sushi at SUSHISAMBA park
Six years ago: Announcing "Featured Fridays"
Seven years ago: Tuscan White Bean and Garlic Soup