A Look Back at Our First Thanksgiving at Home

Not traveling for the holiday this year meant that I could go all out for our first Thanksgiving dinner at home. 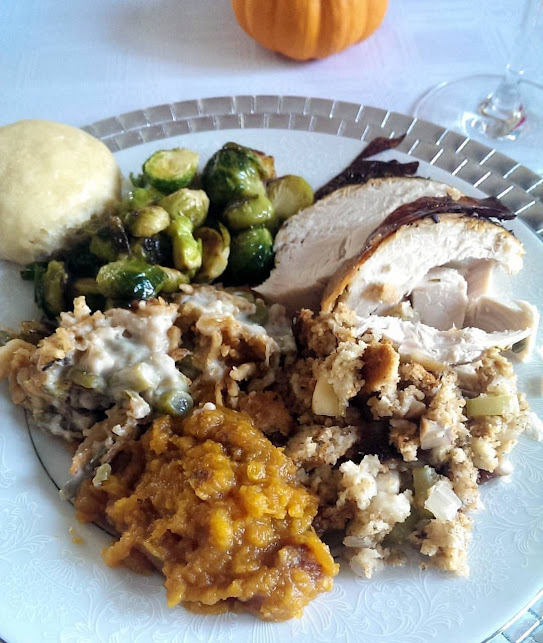 This post contains affiliate product links. Clicking on the links may result in my being paid a commission based on product sales. Regardless of commission, all opinions expressed in this post are my own. For more information, please review our site policies.

Before I fully commit to the Christmas season on Taste As You Go, I want to take some time to relive Thanksgiving. Especially since this year was the first time Stephen and I stayed home for the holiday instead of packing up the car to drive north to my father's in Connecticut or south to his mom's.

When I made it known that I'd be cooking a turkey and all the trimmings for a dinner party of two, many of you reached out to ask about the menu. Aside from giving sneak peeks at the prep work I did, I kept pretty mum about the dishes I chose to make for our meal.

I had considered sharing the menu ahead of the holiday, but then I freaked out over the idea and worried that the pressure of actually pulling it off would get to me (public accountability, after all) and we'd wind up ordering take-out instead.

Now that Thanksgiving is over and I've had a chance to reflect on the experience of it all, I'm ready to reveal our full menu, as well as some of the lessons I learned and the things I'd tweak for next time. 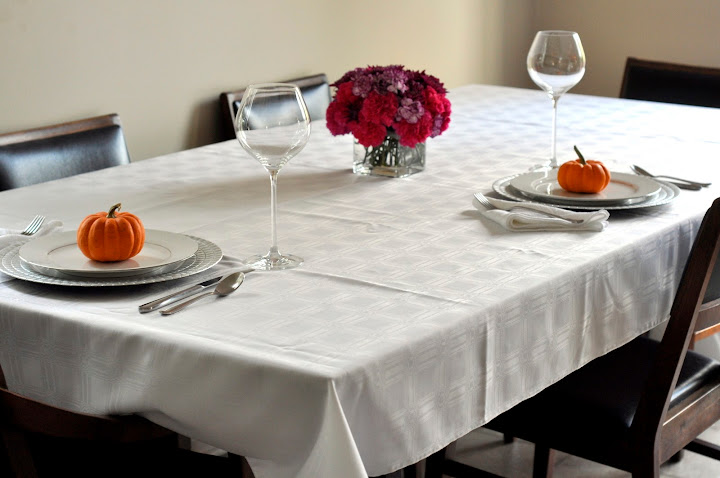 Even though it was just the two of us, we put the leaf in the table (so we'd have more room for the food!) and broke out the white tablecloth. 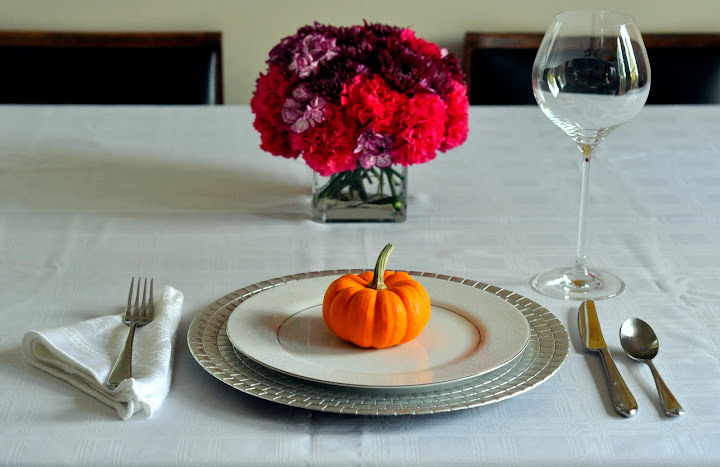 I could have used our everyday dinnerware, but it was a special occasion, so I hit up my collection of food styling props in order to set a really nice table. And, to save time, I set everything out the night before so I wouldn't have to worry about interrupting my carefully organized cooking schedule.

I'm talking über organized. As in a spreadsheet with conditional formatting that would let me know at a glance what I still needed to do, what was in progress, and what was finished. It sounds obsessive, but it really helped keep me on track. 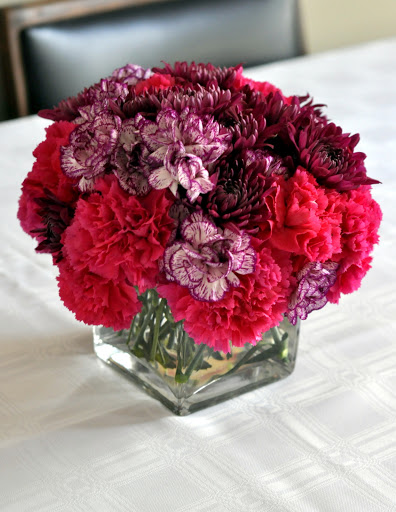 Another thing I handled the night before? Our floral centerpiece.

These bright and cheerful flowers were actually taken from two larger bouquets from Caroline's baptism/church service held the Sunday before Thanksgiving. I just pulled out the blooms that still looked fresh and rearranged them into something smaller for the table. 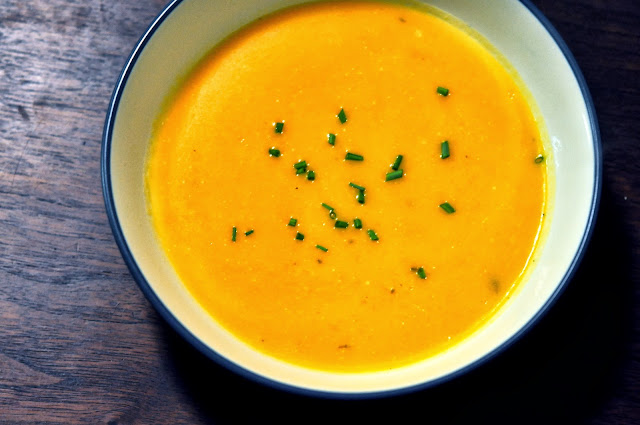 Although we probably didn't need appetizers, I wanted to have some food out for us to pick on while I cooked. I made a batch of my Roasted Butternut Squash Soup (minus the sour cream) a few days in advance and warmed it in one of our slow cookers. That way it would stay warm without taking up valuable space on the stove.

Unfortunately, I was so consumed with cooking and Stephen was so preoccupied with Caroline that neither one of us got around to eating any of the soup. Womp womp.

It didn't go to waste, though. Once it cooled, I poured it into a freezer bag so we could have it for dinner another night. 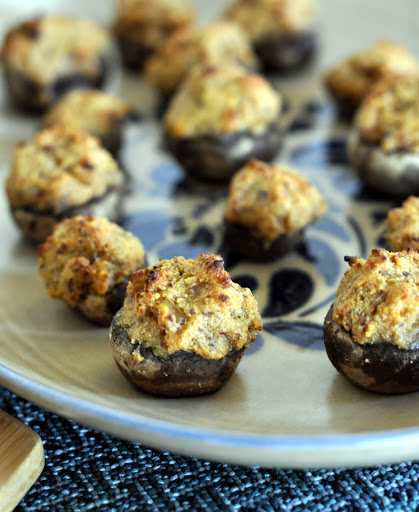 In addition to the soup, I attempted to recreate my Mom's Stuffed Mushrooms... The ones she'd serve at parties during the holiday season. While they tasted good, they weren't the same. The consistency of the filling was off, so I'm going to have to play around with the ingredients some more before I can say that they're just like hers. 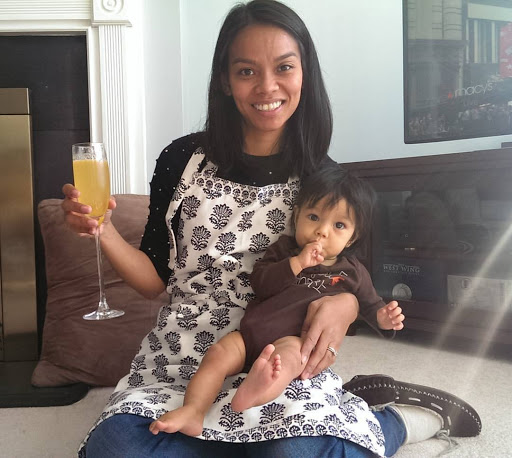 Oh, and did I mention that we made a batch of Thanksgiving morning Bellinis?

No better way to use that last bottle of Prosecco from our wedding and some of the fresh peach puree I made for Caroline that we had in the freezer. (More on that in a later post.)

But, enough about the appetizers. Let's get to the good stuff. 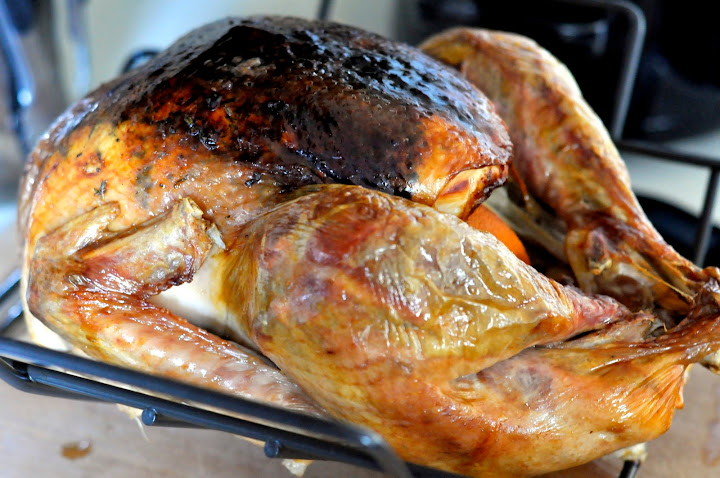 Obviously, there was a turkey.

I made a Butter-and-Herb-Roasted Turkey, using this recipe as a starting point, and a vat of rich pan-gravy. I originally planned to brine the turkey, but we were super busy with preparations for Caroline's baptism before Thanksgiving, and I didn't have time. Aside from leaving the turkey in the oven a touch too long, I think the bird came out really well and had great flavor thanks to the fresh thyme and rosemary I chopped and mixed into the butter and the fresh oranges I stuffed into the cavity.

PS. Even if you quadruple-check for the bag of giblets, it's still possible to leave them in the turkey while cooking. Thank goodness it was a Butterball. 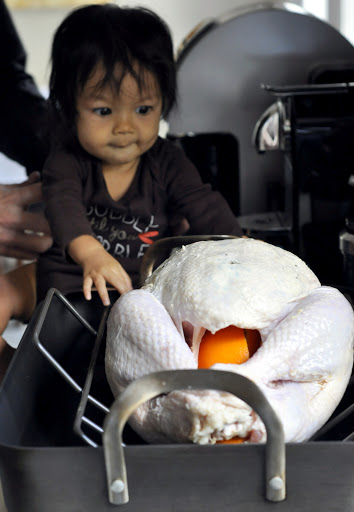 Or, maybe the turkey tasted so good because I had the help of this adorable little munchkin. 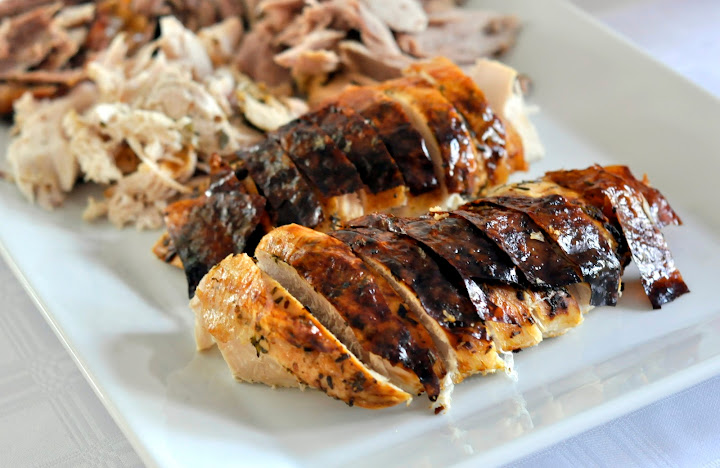 To make sure he gave the turkey the royal treatment, Stephen brushed up on his carving technique. His presentation was so impressive! 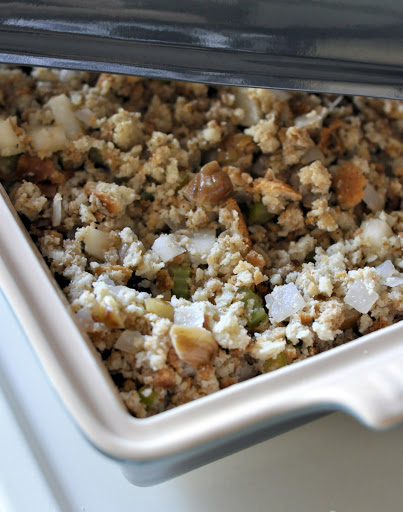 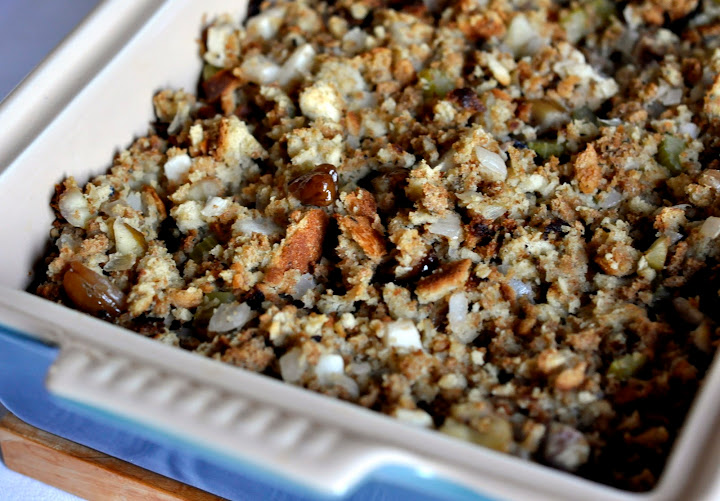 And since Thanksgiving is all about the sides, I made sure to make a wide variety. There were traditional favorites, like my Apple Chestnut Stuffing, 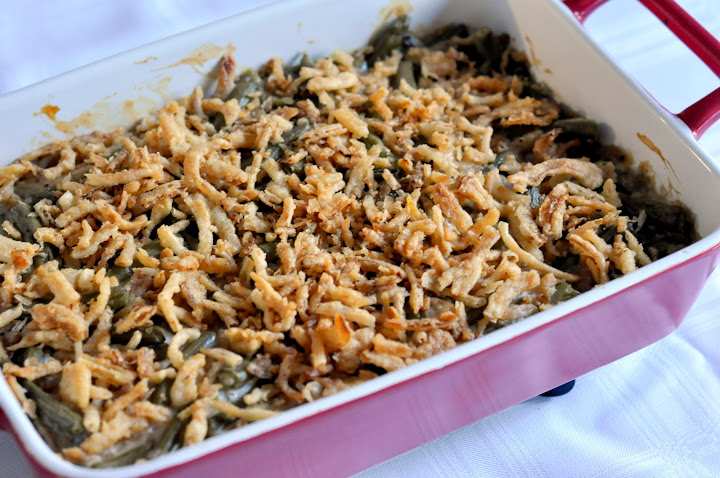 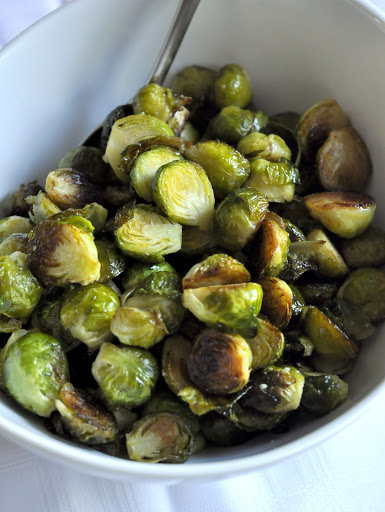 and Roasted Brussels Sprouts, as well as a handful of new-to-us dishes. 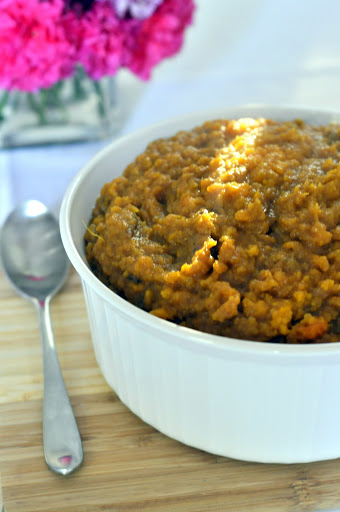 Stephen isn't a fan of sweet potatoes topped with marshmallows, which is how I grew up eating sweet potatoes on Thanksgiving, so I searched for another way to prepare them. When I found this recipe for Crock-Pot Sweet Potato Casserole, I knew it was the way to go.

The casserole didn't turn out the way I expected (the brown sugar pecan topping was soggy, so I wound up stirring it into the mashed sweet potatoes instead), but it still tasted delicious. Next time, I'll try cutting the recipe in half, only using the slow cooker to cook the potatoes without the topping, transferring the mashed sweet potatoes to a baking dish, and finishing them off in the oven so the pecans still retain a bit of crunch. 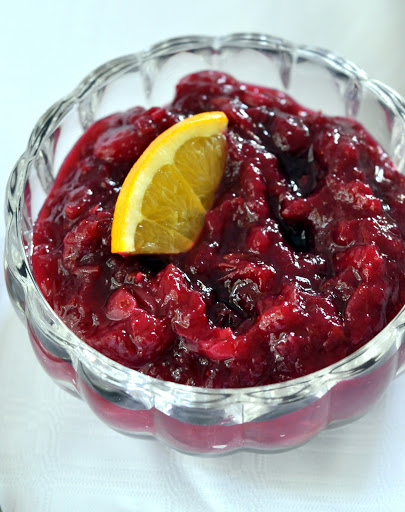 And, even though I'm allergic to cranberries, I made fresh Orange Maple Cranberry Sauce for Stephen so his Thanksgiving meal would be complete. 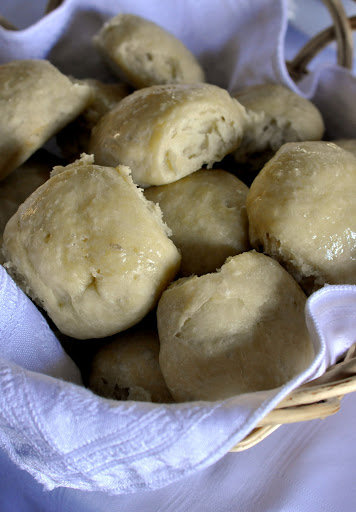 You know, just in case we didn't have enough carbs on the table. 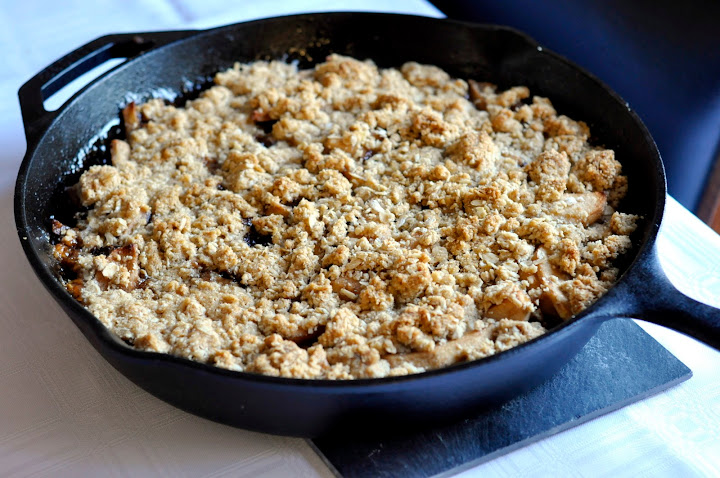 Just before we sat down to eat, I slid dessert into the oven to bake -- Apple Crisp {Baked in a Cast Iron Skillet}. I love how easily this version comes together and how the cast iron skillet keeps it warm long after it's finished baking. Had I more time, I would have made a fresh batch of my Vanilla Bean Ice Cream to go along with the apple crisp, but that just wasn't in the cards this time around.

So... That's it. That was our Thanksgiving dinner from soup to nuts apple crisp. Cooking the whole meal myself was exhausting, but it was worth it because it made our first Thanksgiving at home, as a family of three, that much more special. 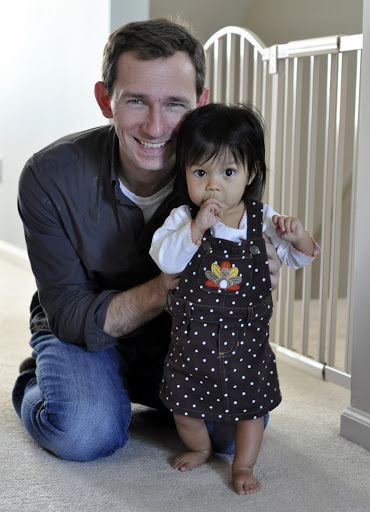 I hope you all had a nice Thanksgiving! xo