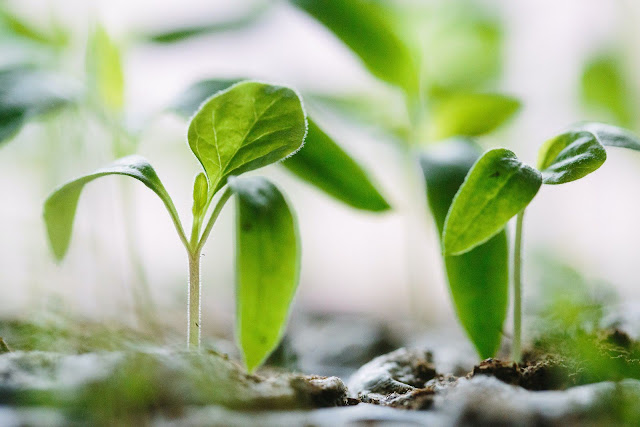 
This post contains affiliate product links. Clicking on these links may result in my being paid a small commission based on product sales. Regardless of commission, all opinions expressed in this post are my own. For more information, please review our site policies.

After some strange weather here in Connecticut -- it snowed -- the sun came out today and we were able to spend more time outside. The kids loved being able to ride their bikes and play in the driveway. (Because it's better than being stuck inside with their stressed-out parents.) Stephen's been doing a little bit of yard work in preparation for the first lawn mowing of the season... and we've both been slowing cleaning up our front garden so we can put down fresh mulch.

Earth Day is coming up this week, so I finally pulled the trigger and ordered a composting bin. Our food waste is already pretty low since I've become more strategic in the kitchen over the past year... but now's our chance to reduce our food waste even more.

Reducing our food waste has been a long-time goal of mine, so it makes me happy to make some more progress on this front. Even if we're not entirely sure what we're doing. If you have composting tips, please share!

In the meantime, it's time to share our weekly menu plan. We won't have another grocery delivery until next Sunday. I made sure to make use of the ingredients we already have on hand to avoid sending Stephen to the grocery store.

So, if you're interested, keeping reading to see what I've planned for dinner at our house this week. I'm also sharing how we did with last week's plan, so be sure to check it out!


I needed to save our panko for tonight's dinner, so I used some homemade brioche breadcrumbs that I had in the freezer. Since we didn't have corn flakes, I only used the brioche breadcrumbs for the breading... which meant the end product wasn't as crispy on the outside. Turns out that didn't matter to my family, as the overall flavor of the pork chops was delicious. The only other change I made for dinner was the vegetable. We had a box of corn niblets in butter sauce in the freezer, so I made that and added the rest of an open bag of whole kernel corn to cut the richness of the sauce.

As for the carrot cake, we didn't have walnuts in the house, so I used some nuts from a jar of roasted mixed nuts that we had in the pantry. I used pecans and roasted almonds and cashews. Not bad!


I realized that the ingredients I had for the quiche would keep for another week, so I pushed this meal to this week. Instead, I made an adaptation of my Creamy Parmesan Risotto with Roasted Shrimp and Peas. I wanted to use up a container of fresh mushrooms I had in the refrigerator, so I sauteed those in some butter and olive oil and used them in place of the shrimp.


I ordered some green bell peppers from Peapod, so I sliced one up and sauteed it with a sliced onion to add some extra texture on the sandwiches. I served the kids their sandwiches open-faced, which left us with one hamburger bun at the end of the meal. (If you remember, I wasn't able to get the proper rolls for the sandwiches, so we made do with the hamburger buns we had in the freezer.) Turns out this was perfect because Stephen made a sandwich with the leftovers for lunch the next day.


My family is lucky. I'll leave it at that.


I was exhausted by Thursday, so I skipped the vegetables and just served the canned ravioli. To stretch the meal a little bit, I made the kids some plant-based chick'n tenders.

Two notes: the canned stuff tastes different than it did when I was a kid... and canned ravioli did not fill up the bellies of the adults in the house and we hit our evening snacks a lot earlier than usual that night!


I had everything I needed for the pizza except cilantro. (Honestly, I didn't see the point in incurring that expense for one meal.) But I added some chopped green onions on the top after the pizza came out of the oven to add another layer of flavor and some color.


We psyched ourselves up for dinner all day. Even our 5yo was excited about the idea of ordering Indian food from our favorite local restaurant. Unfortunately, we discovered that the restaurant had decided to close for a couple of weeks so Indian take-out wasn't going to be a possibility.

But we rallied and ordered Thai food instead. It was so, so satisfying.

These meals were planned with our pantry and freezer in mind. Very few of these dishes needed supplementing with items from the grocery store.


When the first wave of panic shopping happened, I remember seeing people posting photos of the items left on the shelves. One of those items was shrimp-flavored ramen. Admittedly, that's not my preferred flavor, but I would've grabbed a pack or two just for the noodles.

Then I could've doubled this recipe!

The only thing I didn't have in the house when I planned this week of meals was fresh ginger. Thankfully, Stephen was able to pick some up during his grocery store run a week ago. Making this depleted my supply of panko (as I thought it would) and low-sodium soy sauce, so I've added those items to my next Peapod order.


I have everything I need for this quiche in the house already. Though, to be honest, I'll be using grated Swiss rather than Gruyere since I haven't been able to find Gruyere in a while. (Weird, right?) I've made this substitution before, so I'm not terribly worried about it.

I'm more worried about whether my children like spinach this week.


I found the recipe for this dish on the back of the pasta box. The recipe calls for 12 ounces of spicy Italian sausage. I have a pound of Italian sausage in the freezer, but it's sweet rather than spicy. No matter. I'll add red pepper flakes to the sauce, made from canned plum tomatoes (we have those in the pantry) to give it some heat. The rest of the ingredients -- onion, garlic, heavy whipping cream, dried parsley, dried basil, and Parmesan cheese -- are all in hand.


I'll use up the rest of that pound of Italian sausage on this week's pizza. And the rest of the green peppers we have in the house. We have an open jar of pizza sauce in the refrigerator and plenty of shredded mozzarella... I just need to make time to make homemade pizza dough!


We started the week with meatballs, so I thought it would be fun to end the week with them as well. Stephen was able to find a meatloaf mix at the grocery store, so I'll be able to have meatballs for dinner with plenty to stash in the freezer for later.


How are you guys doing? Are you hanging in there?